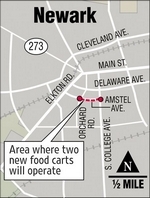 By IRA PORTER | The News Journal

NEWARK — If University of Delaware student Adeel Iqbal gets his way, his mother will be able to achieve her dream of operating a food cart on the school’s Newark campus.

But it’s a dream that isn’t shared by at least one restaurant owner on nearby Main Street.

Newark City Council, acting on a request from the university, unanimously approved a pilot program this week to allow sidewalk food vendors at UD.

Rick Armitage, the university’s director of state government affairs and community relations, said the intent is not to compete with restaurants along Main Street, where diners can find Italian, Japanese, Chinese, Vietnamese, Middle Eastern, Mexican and vegetarian food. The idea is that the carts will serve food not available there, he said.

“The idea originated with some staff that went to school in Philadelphia and fondly remembered all the food-cart vendors at Penn’s campus, or Temple’s. They could get a quick meal and not miss their next class.”

“If they open up, more people will stop there and not come here.” — Kazi Samee, owner of Indian Sizzler, the new restaurant he is opening on Main Street.

But Kazi Samee, who is opening a new restaurant, Indian Sizzler, on Friday, does not want to see the food vendors.

“I am thinking that a vendor can cut down on my foot traffic. If they open up, more people will stop there and not come here,” said Samee, who said he is paying about $3,500 a month in rent.

Under the program, two food carts will operate on the north side of Amstel Avenue between South College Avenue and Orchard Road.

Others from the university and the city see the pilot program as a positive.

“Now, we’re going to see what happens,” said Roy Lopata, director of planning and development for the city of Newark. Lopata said he hasn’t received any complaints from the 40 restaurants in downtown Newark.

“The university came and approached us. We thought it was something worth considering.”

Samee said he didn’t see the point in saying anything to council members.

Bennie Dollard prepares an order from his food cart on Main Street in Newark. Dollard, who has run his cart there for seven years, is the only vendor at that location.

Armitage said the university has met with three possible vendors who specialize in Thai, Afghan and Jamaican cuisine. They plan to meet with more.

Before the vendors begin operating, they will have to obtain a vending permit from the city, pass a health inspection, show proof of $100,000 in insurance and clear a criminal background check. Newark police also will have to determine if the cart’s site is safe and secure.

Ultimately, the permission lies with the adjacent property owner, which is UD. Vendors will have the option of paying fees ranging from $50 for a day, $250 for a month or $500 for a year. They will be required to keep carts stationary on a sidewalk area while operating stands that are no longer than 4 feet wide, 6 feet long and 8 feet high.

Under current municipal code, vendors are allowed on Main Street with the permission of the proprietor whose shop they want to operate in front of.

Bennie Dollard is currently the only vendor on Main Street. He makes an assortment of specialty sandwiches, including the corona, which includes blackened chicken, jerk sauce, sauteed peppers and ranch dressing. He was busy Tuesday, as a crowd of mostly students ordered sandwiches.

“I had an issue with the fact that whoever decided to do this didn’t ask me if I wanted to be a part of it,” said Dollard, who has run his cart for seven years.

Dollard said his sandwiches are unique, and so he is not worried about another vendor coming and taking business away.

“I feel like if a businessman is doing what he needs to be doing and running his business, he won’t have time to worry about what someone else is doing,” he said.

Dollard asked a number of questions at Monday’s council meeting, seeking clarity on the definition of ethnic foods and if the new vendors will have the same limitations he has.

“Just so I’m clear, what we are doing is taking something that is already in place and extending it to another area,” said Councilman Paul Pomeroy. “I think the dining experience is totally different for someone getting food from a vendor than what you expect at a sit-down restaurant.”

Iqbal, a junior public policy major and theatre minor at UD, brought a container of spicy potato kebabs his mother had prepared and shared them at the council meeting. Then he gave a teary-eyed plea for council to approve the amendment that might allow his mother’s dream to come true.

“I want to make this happen for her.”