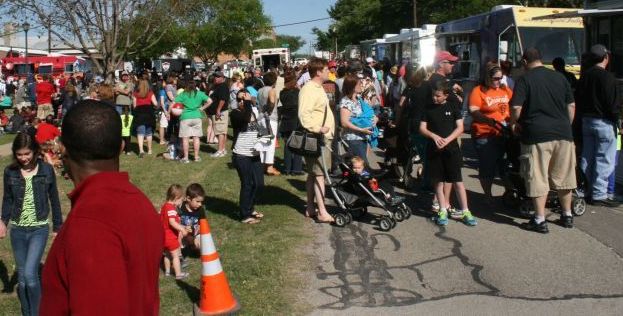 Food trucks, music, family activities and a beer garden; Downtown Frisco StrEATS has a little something for everyone this weekend.

The event, which is tomorrow from 1-7 p.m., is looking to expand on its past successes in its third go-around.

This year, there will be 15 local food trucks set up on Fourth Street between Main and Elm streets, two stages for six musicians, 35 vendors, a beer garden and more.

JoAnn Fritz, the vice president of Main Street Merchants Association, said she hopes the event is a major draw to the area.

“It’s a family event; we’ll have face painting and other children’s activities,” she said. “We just hope people come down, bring their families and have good food while listening to good music.”

Members of the association have been planning the event throughout the past year by researching various local food trucks and musicians, who would be a good fit for the event, Fritz said. The main goal is to bring more awareness to the downtown area and make sure it appeals to all crowds, he added.

Audra Denny, who runs the food truck Pompeii, said the setup of this year’s festival should offer a better experience for everyone.

“Last year, the music was in the middle, and the food trucks were around the perimeter, so that made calling out orders kind of difficult,” she said. “This year, they have the trucks in a separate area from the music. That will also give more people incentive to walk around the area to check out the vendors and everything else offered.”

Pompeii serves Italian cuisine that’s homemade and provided by local sources. Festivals like this provide an opportunity for restaurants to better market themselves and grow their clientele, Denny said. Frisco is outside the truck’s normal stops, and she said venturing outside of Dallas leads to many catering opportunities.

Being her second year, she said she feels more prepared.

“It was a madhouse — absolutely crazy,” she said. “It’s really family-oriented, and we were kind of surprised by that. So we know we need to have a small kids menu for this weekend and we’ll be able to handle the masses better.”

Ruthie’s Food Trucks have been a part of the first two festivals and is making its return again this year. Robin Skinner said one of the best things about the event is the people.

“We love this area, and it’s been such a successful event in the past,” she said. “Everyone in Frisco is super nice, and it’s a great atmosphere for a festival like this.”

Ruthie’s serves grilled cheese sandwiches and prides itself on being a philanthropic organization. Each month, the company chooses a local nonprofit that they feature daily on social media. Through this program, they serve food to the organization and donate a portion of the profit.

This month’s recipient is Equest Hooves for Heroes, which aims to improve overall wellness by leveraging the powerful bond between horses and humans. It offers three specific components for military service men and women: hippotherapy, therapeutic horsemanship, and equine facilitated psychotherapy.

Events like this help further the goals of both Ruthie’s and the other organizations it benefits.

Representatives from the Dallas Cowboys will be at the festival with a merchandise truck, FC Dallas will have goals for shooting and the Texas Legends will also be there.

The music kicks off at 1 p.m. and spans the entire event with six artists playing their own styles of country music. Mark David Manders, who goes on at 6 p.m., is the headliner.

To accommodate the stages, trucks and vendors, Downtown Frisco StrEATS is more than double its size from last year and Fritz said that resonated well with the crowd.

“There was an overwhelmingly positive response,” she said. “It gave people more room to stand in line with the trucks and to just walk around and enjoy the entire event. We’re hoping if this event continues to be a success that we can expand it a bit more.”

Free parking for the event is at the City Hall parking garage with complimentary pedicab rides to the festival.