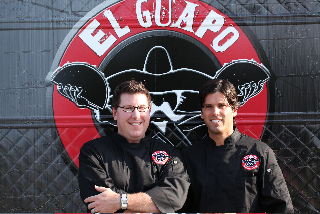 Today marks the first day that hungry Detroiters will be able to order lunch from a legal food truck in downtown Detroit.

While Southwest Detroit has about a dozen legal food trucks, a manager in Detroit’s food sanitation program said none are permitted to sell their goods in downtown Detroit.

“El Guapo is the first one to have secured a space through the Buildings, Safety, Engineering and Environmental Department,” the manager said.

While other food truck operators in downtown Detroit have set up shop without permits, Anthony Curis and Doug Runyon, co-owners of El Guapo, made dozens of trips to City Hall to find a path to legality.

Curis said he visited City Hall about 60 times over the past six months, working closely with Kim James, director of the Buildings, Safety, Engineering and Environmental Department, to secure a locale to operate legally.

“We researched other cities to see how they handled ordinances and decided we would do this right way,” Curis said. “We thought about doing it rebel-style, but we didn’t.”

Their patience paid off. James granted Curis a six-month, special-use permit, which he calls his “golden ticket.”

As part of the process, Curis developed a checklist of items required from the Buildings, Safety, Engineering and Environmental Department, as well as the Department of Health and Wellness Promotion that can be used as a guide for other food truck operators.

The list includes having a signed copy of the title to the truck, having a site plan signed by a state-licensed engineer and surveyor, and a proposed menu with a list of ingredients.

“It’s not like we are shutting the door behind us,” said Curis, who gave a copy of the checklist to the building department. “There is room for several food trucks in the city, and we will help people.”

Kristyn Koth, owner of Pink FlaminGo, began operating her food truck illegally in Detroit about a year ago but was forced to stop because of mounting violations.

Now, with a little help from Curis, she is pursuing the kind of permit Curis was granted.

“I went to the same departments as he did over a year ago, but there wasn’t the same kind of excitement for food trucks at that time,” Koth said. “But maybe if he (Curis) would have done this when I was trying, he would have hit the same roadblocks I did.”

Koth’s attempts to operate her truck led to a mention in the New York Post, prompting The Discovery Channel to chronicle her trials and tribulations for an upcoming series to air on “Planet Green” called “Detroit in Overdrive.”

“The producers could not believe what I have had to go through,” she said.

Koth says she does not know when Pink FlaminGo will be allowed to legally sell food downtown.

Jeff Aquilina, owner of Concrete Cuisine LLC, says jumping through the city’s hoops may not be worth the effort.

Aquilina attended a City Hall meeting last month to address the city’s desire to amend its confusing and prohibitive mobile food truck laws but said the proposed changes do not go far enough.

“Basically, they are trying to change the laws, but even if everything passes there are still so many restrictions it may not be worth our while.” Aquilina said.

Aquilina opened Concrete Cuisine about a month ago with the aspiration to serve Detroiters outside of Comerica Park and Ford Field, in Midtown and downtown. But when he discovered it was illegal to operate a food truck in those areas, he went to Livonia where he has become the sole food provider for Livonia’s summer concert series called Music in the Park.

“To tell the truth, we have been so busy we forgot about the city of Detroit for a while,” Aquilina said.

Chris Gulock, city planner with the Detroit Planning Commission, says the issuance of temporary-use permits is a short-term fix.

Gulock has been working with about 20 food truck operators to draft a less restrictive ordinance that would open up downtown to food trucks and vendors.

“Our plan is to go back to the City Council in the fall with some recommendations on a proposed ordinance regarding food trucks,” Gulock said.