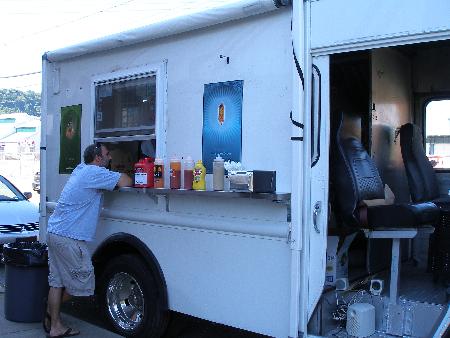 I had a dog at Franktuary Downtown yesterday and talked to co-owners Tim Tobitsch and Megan Lindsey about their New Year’s plans.

They hope 2011 is a far cry better than the one we’re slipping out of. In 2010, their new Franktuary truck sideline business lost the bulk of summer revenue to the bureaucratic maze, then the engine of their converted 1988 vending truck went kaput, forcing them to cancel events including First Night.

But they were invited to park on the set of four movies. “That kept us in the black,” Tim said.

The Franktuary truck is still in business, parked in the rear lot of the Hot Metal Bridge Faith Community Church, 2700 Jane St., South Side. It is licensed to be there and serves lunch from 11:30a to 1:30p Monday through Saturday.

As of the coming Monday, the trucksters launch a new menu which includes something for Canadians who long for their comfort food poutine. It is touted on the menu as “Penguin Poutine – Quebec fries topped with cheese curds and brown gravy,” so named in honor of our Canadian hockey pros.

The curds are produced at Arsenal Cheese in Larryville and the gravy is mushroom based for vegeterians.

The truck menu includes two kinds of franks, beef chili, a vegetarian soup of the day and a hot punch. Bring your own mug and get a quarter off. You can check out the menu here for more details and prices.

Tim said he hopes to have the engine fixed by mid-January and is thinking of an idea for a  fund-raiser.