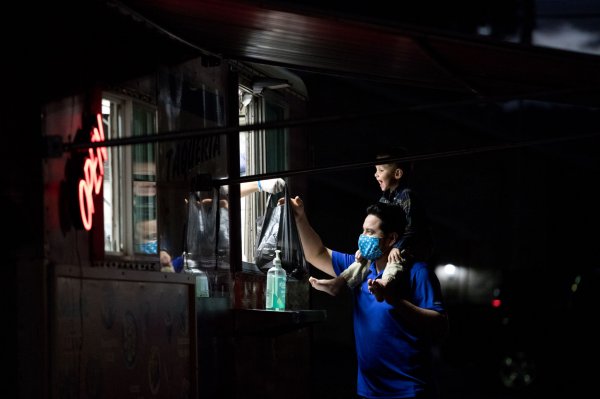 By Candy Neal | The Herald

A year ago, seeing a food truck on a street or parking lot in Dubois County was unusual.

Now, they can be seen weekly. And people flock to them when they’re around.

Theresa was passing through downtown Jasper Wednesday evening when she noticed the trucks lining the Courthouse Square. It was the last, monthlyy Downtown Chowdown event planned for the season.

She stopped in to get a bite, and selected a burrito bowl.

“I love ethnic foods,” Theresa said. “So to be able to get something like this in a safe way is wonderful.”

When the COVID-19 virus became prevalent in March, lots of things changed. People had to be careful to not stand so close to each other. We all started wearing masks. Restaurants and other indoor facilities were ordered to close.

Now, restaurants and facilities are open again. But precautions are still in place, including masks and social distancing. And while rules have started to loosen some, health officials still advise that being outside is safer than being in an enclosed area with a group of people.

And staying outside is an automatic with food trucks, because they do not come with guest seating.

Melissa Day of Jasper and her children Madelyn and Nolan sat on the steps of the courthouse Wednesday evening eating a variety of foods: a crepe, German apple cake, eggrolls and chicken gyros.

They came from the different food trucks that the lined the Square, and they were all food items that are not normally available in the city.

“We like to try new things,” Madelyn said. “You get to choose what you want, which is more fun. It’s more freedom this way.”

Each food truck offered some different kind of food, giving people a variety of foods to choose from, as opposed to having one menu in a brick-and-mortar restaurant.

“You can get a few items from each truck, if you want,” Melissa said. “And you can sit outside. I love being outside.”

Because they don’t rely on a building to provide food, the trucks can move to any outdoor location.

Recently, food trucks were stationed at the Haunted Huntingburg Blues Festival at Market Street Park, in addition to the Chowdown events in Jasper.

More steadily, two trucks sit in the parking lot of Schroeder Complex each week. Taqueria El Llano and Oink Inc. Smokehouse see a steady line of foodies looking for their lunchtime meal or picking up dinner to take home.

Tim Flick, owner of Oink Inc. and a well-known caterer locally, said he started the food truck because of the pandemic

“We lost several thousand dollars a week in catering revenue because of the pandemic, and laying off my team wasn’t an option,” he said. “Having a fairly large commissary for our Fueled Strength Meals, Catering, and Ruth’s Red Velvet Desserts, I felt like we had the room, and it was a natural transition to consider creating a food truck concept.”

He’s always loved making barbecue, so he chose that as the focus of his food truck. He started up at the beginning of May.

“We’re actually getting requests to come to Evansville and other areas,” Tim said, “so we are staying very busy.”

But the pandemic has affected the food truck industry in a negative way as well, said Jo Husk, owner of A Tasty Bite of Europe food truck.

“So many festivals were canceled this year, and food trucks depend on those,” she said.

So when the pandemic hit, it was just another fluctuation in the business. But she saw customers approach the pandemic from two different perspectives.

“It can go either way. It can be that people are very skittish and they cook at home,” Jo said. “Or they take the approach of since they couldn’t go to the restaurants, go grab something from the food.

“But things have loosened up a little bit. And people are more open right now to food trucks, more than they were a couple of months ago,” she said.

She started her truck because people would ask her to cook various European specialties that she knew.

“I like to cook. Well, I like to eat, so I cook,” she said, laughing. “And then someone asked me to make tiramisu. And it started from there.”

The key to having a good food truck is to have a unique specialty that’s done well, Jo advised. “You know, everyone has their niche,” she said. “I do mostly crepes, that’s my staple. And I make them special.”

Tim believes the desire for having food trucks available will grow.

“I think this pandemic has created fear for many people regarding group settings,” he said. “But even when that fear subsides and people feel good about gathering in groups again, food trucks will still remain popular. Food trucks have been very popular in the bigger cities for several years now and they are only gaining momentum.“

The U.S. Census Bureau reported that the number of food truck establishments in 2018, the latest data it has available, was 5,970, nearly double the 3,281 in 2013. In 2018, these businesses employed 16,210 workers and reported annual payroll of $320.6 million. And 90 percent of all food truck establishments are individual proprietorships, Andrew W. Hait, an economist with the Bureau, reported.

“Many now provide gourmet meals that come right to our neighborhoods, allowing us to ‘dine out’ even when indoor dining is restricted during the pandemic,” he said. “When we patronize them, we support businesses in our communities that bring truly local flavor not only to our larger metropolitan counties but to our smaller, more rural ones, which expands that flavor to a broader swath of America.”

Theresa said she’s been to several food trucks in different cities and different countries. She enjoyed those experiences, she said, and hopes the trucks continue to bring similar experiences to Dubois County.

“It’s fun and it’s unique,” she said. “And it gets people out and feeling energized and hopeful. We need that right now.”