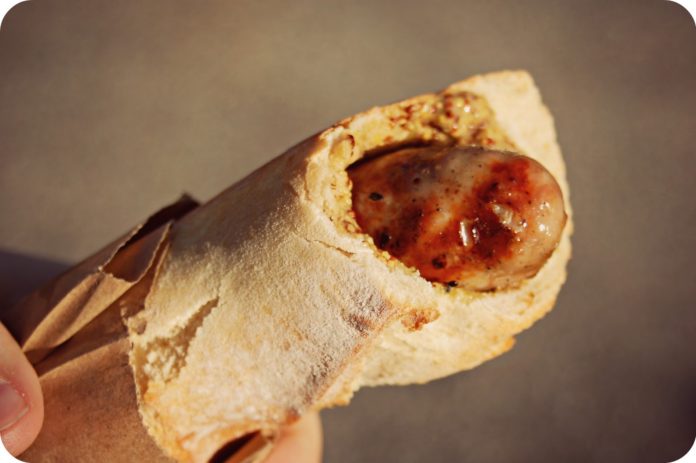 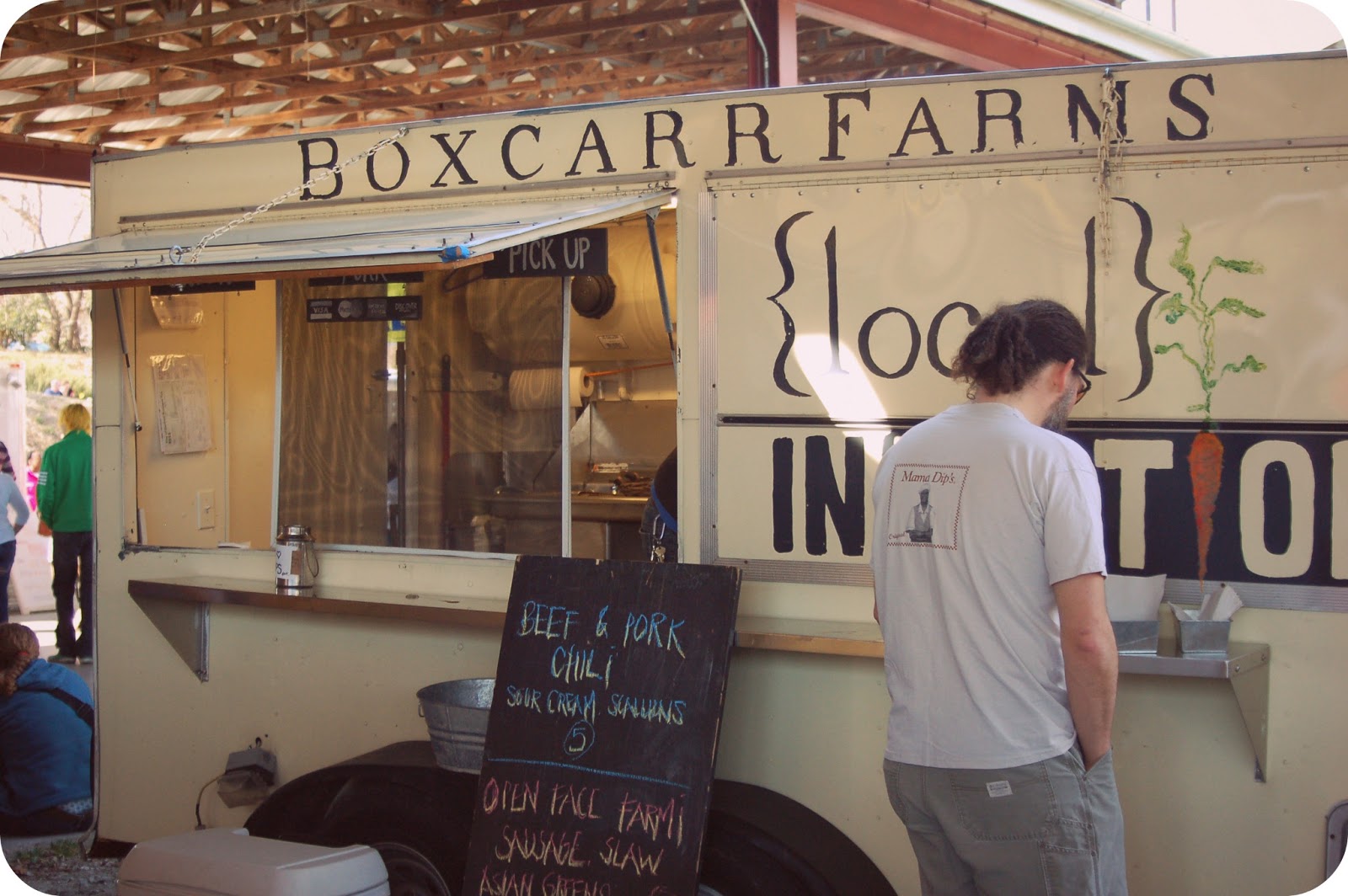 Bigbad and I ventured out to Durham for the Food Truck Rodeo. Smallgood Co-worker came across the event and was so thankful it was on a Sunday, so she didn’t have to stick to lent restrictions.

Among the three of us, we tried a fair amount of interesting foods.  If we had arrived to the event earlier (and also not when we hadn’t eaten anything), we probably would have tried a lot more.  But the lines snaked down long stretches of pavement.  Smallgood Co-worker waited 40 minutes for her crepe.  She said it was worth it.

Bigbad and I stood in line for Baguettaboutit, a sausage in a baguette truck, for close to the same amount.  The website and the actual food appears uh…vulgar, but it was dang good.  Lots of “that’s what she said” jokes had to be left unsaid for the eating of this baguette and for the writing of its deliciousness. 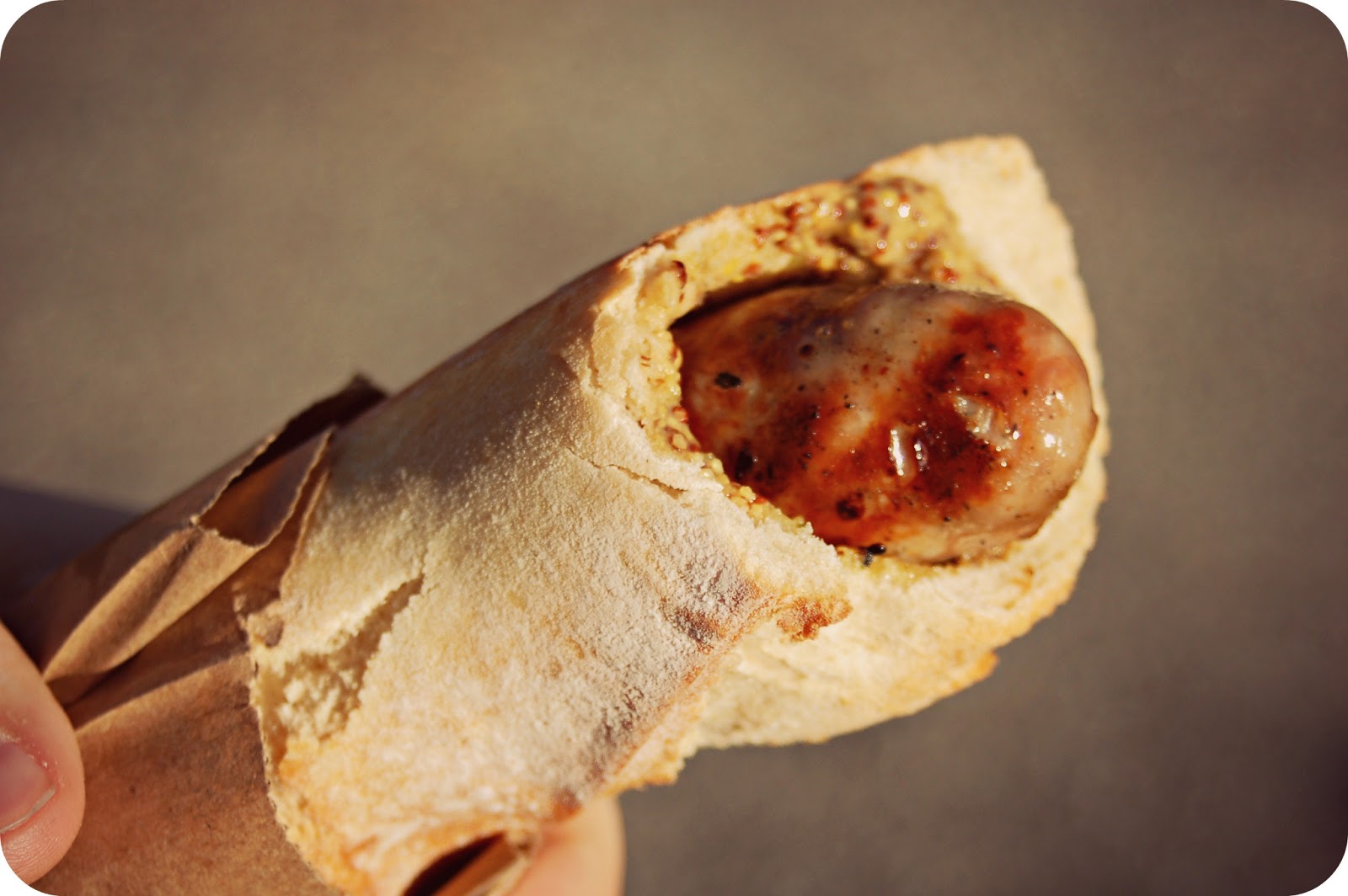 My favorite truck that I tried was Bandido’s.  $2 tacos?  Hell yes!  And they had walking tacos, or what I refer to as taco-in-a-bag (yeah, that’s a link to Betty freakin Crocker’s taco in a bag recipe.  The poor soul who needs a recipe for that is ridiculous).  They only had beef left when I arrived (all out of chipotle chicken), but the tacos were still out of this world amazing (probably due to some fabulous queso). Thankfully, my co-worker helped me with the salsas and stopped me from ruining my food by putting El Scorcho on my tacos.  I laughed, “I thought it was something like ranchero sauce.”  Bullet dodged.

Whatever gods of afternoon festivals and food truck rodeos were shining down on us because we spotted a beautiful red table with three seats completely void of messy foods or people.  We grabbed it so we could chow down on some nachos and tacos and listen to this jazz group.  The KoolAid at the event must have been spiked, either that or the music put the kids in a trance where they were all very expressive, dancing with hoola hoops, dancing with scooters, dancing while playing soccer, or just dancing.  It was too cute, especially when the band was jamming to “Mary Had a Little Lamb.” 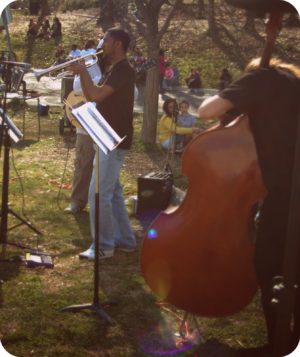 For the most part, I’m not all gung-ho about the delusions of a Durham revival.  Seriously, anyone from Durham talks about how much they love living there and how Durham is a really awesome town (the art scene, the restaurants for foodies, blah, blah, blah).  Sorry I don’t buy it and I’m not drinking your KoolAid (even if it will make me dance like a free-spirited child).  I’m loyal to Raleigh, but dangit, Raleigh, why must you be so anti-food truck?