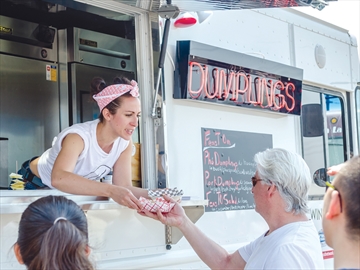 The event was thrown in limbo earlier this year after Oshawa council passed a motion preventing the event from running on Father’s Day because it coincided with the Fiesta Parade.

Determined to keep the inaugural downtown festival, organizers moved everything back a day so the festival will run on Friday, June 19and Saturday, June 20. The Fiesta Parade will be a day later on Sunday June 21.

Portions of downtown streets including King Street, Celina Street, Ontario Street and Albert Street will be closed for the festival.

Downtown Oshawa Board of Management member and food truck festival organizer Darryl Koster is anticipating between 14 and 20 food trucks.

“They’re going to be lined up and down King Street,” he said.

Mr. Koster, who owns Buster Rhino’s restaurant in the downtown, said he believes the event will be a big boost to local businesses. He said he saw spinoff business at his Oshawa location during Whitby’s first food truck event in 2014.

“I’m very excited, I think this festival is going to be amazing, the festival organizers and food trucks that are coming they’re on board and they want to see this be a huge event,” he said.