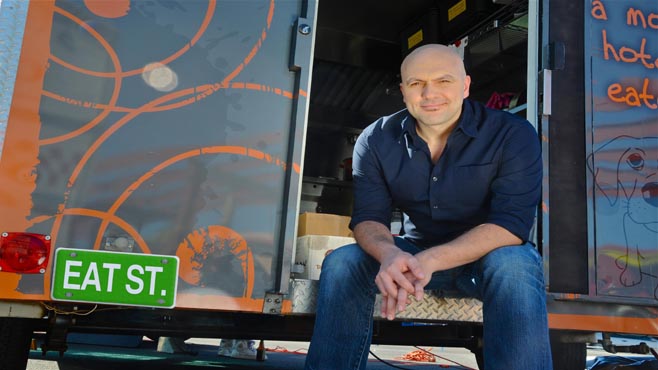 James Cunningham of  “Eat St.” has the funny and the food.

What do you get when you add a hilarious host to a slew of gourmet food trucks? You get “Eat St.,” the popular new hit show on Food Network Canada (and the Cooking Channel) with home-grown comedian James Cunningham, who brings viewers on a tasty tour of food trucks from across North America. This new wave of gourmet eateries on wheels is taking the foodie world by storm and Cunningham is leading the way with his quick wit and big appetite.

Between bites we asked this Toronto-born funnyman about his new hosting gig, how he got the job and when he thinks Canada will finally catch on to the food truck craze.

CraveOnline: So how did you get involved with “Eat St.”?

James Cunningham: I’m a stand-up comic and we always get calls for hosting shows. I had auditioned for a different show entirely, and although I didn’t get that part the auditioning tape got passed around and I got the call to meet with the folks and audition for “Eat St.” They were shooting in NY and my girlfriend lived there, so I went down to meet the crew and we had instant chemistry. We shot a few episodes and it went so well that we shot most of the first season.

CraveOnline: Were you always a “foodie”?

James Cunningham: I love to eat – I eat everything and when you’re on the road you eat at a lot of restaurants – but I can’t cook to save my life. I’m not a great cook but I’m a fabulous eater.

CraveOnline: Do you get to sample all the foods that you feature on “Eat St.”?

James Cunningham:No, I’m not trying everything – to get 52 trucks [on the show] we have crews who are always traveling all over the place. But I try to get to as many as I can – I have tried a lot of them so I can tell you that the stuff coming off of food trucks is amazing.

CraveOnline: You haven’t really shown that many food trucks in Canada…

James Cunningham: We featured three trucks in Vancouver but it’s really hard to find food trucks in Canada. Maybe it’s because of the weather that we have up here. In Miami they have 365 days of sun – our challenge is that we don’t have a lot to offer with our weather. But the explosion of food trucks all over the US is phenomenal, the things that people are whipping up is fantastic, and I hope we’re going to be catching up sooner than later.

CraveOnline: Eat St. is in its first season – will we see a season two?

James Cunningham: We got the renewal. We just started filming season two last week – we did a shoot in LA on the weekend but we’re looking for some Canadian food trucks, so if anyone knows of some good ones, let us know!

CraveOnline: Other than “Eat St.” what other projects do you have in the pipeline?

James Cunningham: I do a lot – I do corporate comedy and I’m still a full-on stand-up comic. I do around 320 shows a year and most of those are for “Funny Money.”

James Cunningham: I wrote it many years ago – I go to schools and universities and teach kids about money, like how to manage money and invest, and that’s the bulk of my live shows. I’m actually in Ottawa doing that now and then I’ll be in Halifax and New Brunswick next week. I always have lots on the go!