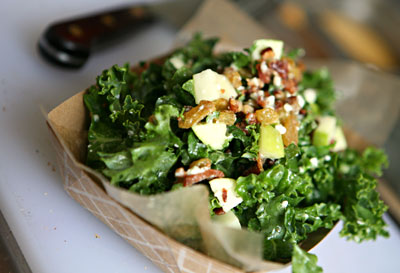 A city food truck providing healthy snacks could be cruising through Eden Prairie in the near future.

As part of the city’s Healthy Eating Active Living Resolution passed in 2012, the Mayor’s Health and Wellness Committee developed several main areas to focus on various aspects of health, including a proposed “Live Well” food truck as a vessel to promote healthy living.

“It would serve as a mobile concession stand,” Parks and Recreation Director Jay Lotthammer said during his report on the concept at a Jan. 7 City Council meeting. “We can use the Community Center as basis. Now families won’t have to swing through to get fast food. It will enhance city events. There’s a lot of excitement around this idea.”

The concept is to purchase and renovate a truck that would act as an extension of the Eden Prairie Community Center Cafe. The truck would be designed to provide a variety of healthy food options for community walk/runs and drive through busy community parks like Round Lake and Riley Lake. The truck would also make program stops at summmer playground camps, senior pickleball and be present at large community events and concerts in the parks.

City staff have already set up satellite locations of the Community Center Cafe at events in the past, but the current practice of setting up a tent only allows for serving items like popcorn, hot dogs, candy and pop. Health regulations make it more difficult to offer healthy meals and snacks, according to Lotthammer. An itinerant health permit must be pulled for each event and location, which also requires an on-site inspection by a health inspector.

The food truck would allow the city to offer healthier options like frozen yogurt, fruit smoothies, grilled selections and chicken wraps from the Community Center. The city could also work with local farmers to provide some of the produce. The truck would be utilized a minimum of 150-200 times in the park system throughout the spring, summer and fall seasons. Activities such as the Staring Lake Concert Series, KidStock Concert Series, Eden Prairie Players, Nature Rocks Series, Senior Center events, private rentals at city parks and many other community events could utilize the food truck.

According to the report, the food truck could be operated and be financially self-sustaining with an estimated annual gross revenue of $22,500 and expenditures of $20,500, with a total cost recovery of 110 percent.

The city council authorized staff and Mayor’s Health and Wellness Committee members to develop a fundraising and naming rights program, and to seek assistance from the Eden Prairie Community Foundation to support fundraising efforts.

The idea has been presented to the Eden Prairie Community Foundation Board, which will consider the food truck proposal as a funding initiative.