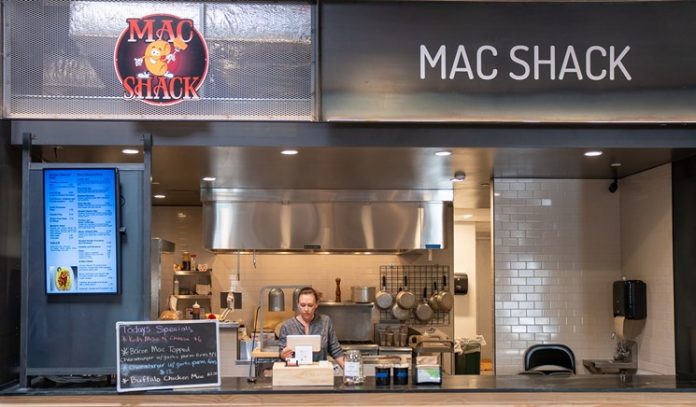 Shannon Hardenbrook was finishing an MBA and living downtown when she began to notice a line of people at a food truck who were waiting for one thing: lobster mac and cheese. It was an occasional special provided by a barbecue truck that would park on her street, but “when they were out of mac and cheese, the line dissipated,” Hardenbrook says. She took note, and a few months later, she put her observations to work by starting up Mac Shack, a food truck specializing in mac and cheese.

In the four years since she opened Mac Shack, Hardenbrook has learned everything about the food-truck business, from setting up a kitchen to making repairs to serving an efficient, customer-approved menu. “It looks like an easy and fun business,” Hardenbrook says, but she adds that there’s a steep learning curve, and 2020 has brought some new lessons.

“I’ve always had a big family and cooked a lot of food, and I thought, ‘How difficult could this be?’” Hardenbrook says, recalling Mac Shack’s first event, when the truck was swarmed with customers. “It was trial by fire,” she continues. The first year was filled with consecutive fourteen- to sixteen-hour days in which she and her team worked double shifts at different events. That year, Hardenbrook had to replace her truck’s engine twice, and she learned how to make repairs using YouTube as a guide. She even had the truck towed to two events when she couldn’t get it running in time.

Despite the vehicle’s behind-the-scenes difficulties, customers continued to frequent Mac Shack, craving Hardenbrook’s macaroni and cheese. People were drawn to the heaping $8.50 plates and the variety of toppings, including lobster, chicken, bacon, jalapeños and green chiles, each for $1 to $3 extra. And although Mac Shack continues to serve all of those toppings, Hardenbrook explains that she’s also learned how to simplify the menu so that her team can work quickly and serve more customers.

In addition to mac and cheese, the truck now only offers a few additional options, including a cheeseburger and a burger topped with bacon mac (both served with garlic parmesan fries or mac and cheese), a grilled chicken and Swiss sandwich, and several sides, most notably the bacon mac fries.

But Hardenbrook gives a lot of credit to the support network of fellow food-truck owners in helping Mac Shack succeed. Many recommended good parking spots for a mac-and-cheese truck, shared catering opportunities, and taught tricks of the trade, such as efficient ways to organize the kitchen line and how to peel smoked Gouda with a potato peeler to save time. In exchange, Hardenbrook used her MBA knowledge and business experience to help other truck owners understand the nuances of contracts, taxes and other paperwork involved in running a food-service business.

That camaraderie continued when Mac Shack expanded, adding a quick-service counter at Edgewater Public Market in 2019. There, Hardenbrook is one of twelve vendors, and the market has “a big family-type atmosphere,” she points out, describing how the different business owners support and encourage each other. During the past year, they’ve exchanged information about different grants available to the industry because of the pandemic.

And within their close-knit community, they also know how these tough times are affecting everyone. “I think there are about six places that don’t think they’re going to make it through winter, out of the twelve,” Hardenbrook says. Not that it’s been easy for Mac Shack, which lost $180,000 in bookings by May and saw overall restaurant and truck sales decrease by about 70 percent.

“If worse comes to worst, we can go back to our food truck,” she says. “The food truck makes more money. If we go back into lockdown, we’ll go back to apartment buildings.”

In the spring, she explains, she had to improvise almost  as if it were the first year, only with a different set of challenges. “It was a whole new learning curve,” she says. “I felt like a complete beginner again.” She has the means to scale back and keep going, but she worries about her industry friends.

Running a food truck is hard work, Hardenbrook believes, though she says her tales of woe are similar to the stories of any food truck. But for her, so far, it’s been worth it. She likes the freedom of the seasonal work and the ability to build a business for her family: She currently operates the food truck with her son, niece and nephew.

As Denver heads into the winter months of the pandemic, Mac Shack will be offering outside dining and takeout at the market, as well as delivery through Grubhub. Order through Mac Shack’s online menu for takeout, delivery and curbside service at Edgewater Public Market (5505 West 2oth Avenue), and see @mobile_mac_shack on Instagram feed for scheduled truck appearances.