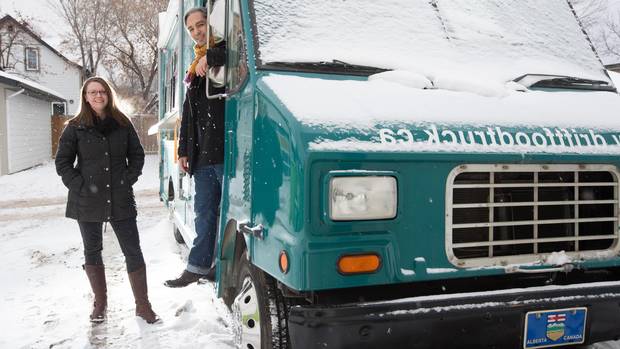 By Liv Vors  |  The Globe and Mail

The acrid, evocative scent of wood smoke lingers in a light industrial neighbourhood, a stone’s throw from Edmonton’s bustling downtown. It is mid-January; the sky is grey, the snow insistent, and the cold unforgiving. Mark Bellows and Ryan Brodziak are busy running their smoker inside their deli, The Local Omnivore. Today, it’s bacon. Tomorrow, it might be pastrami or brisket. The meats rotate, but the fridge-sized smoker keeps chugging along, irrespective of weather.

It’s a luxury that neither Mr. Bellows nor Mr. Brodziak enjoyed with any permanence until this winter. The Local Omnivore’s previous incarnation had wheels.

Food trucks were a nascent phenomenon in 2013, the year the duo launched a truck specializing in hearty sandwiches built around their own smoked meats. Edmonton’s food truck boom happened alongside similar trends in Vancouver, Calgary and Toronto.

“It was a good time to start, because the truck concept was just coming out of places like Portland and California,” explains Mr. Bellows.

Edmonton’s appetite for food-truck fare was insatiable, and the market was wide open, but the pair concede economics, rather than desire to capitalize on a trend, was the deciding factor.

“Ryan and I were always planning the restaurant, right from the start, but there was less overhead to start a truck,” says Mr. Bellows. “We purchased a couple of old delivery vans from a bakery in 2012, built it ourselves, and $10,000 later, we had the truck.”

But unlike Vancouver, where a mild climate allows the city’s growing number of food trucks to operate year round, trucks in Edmonton must contend with harsh winters that turn them into seasonal operations. That shortens the window they have to bring in income, and the annual separation from their trucks – and, often, their business partners and staff – meant recalibrating their work rhythm each spring.

“Our season could be less than four months,” said Mr. Boldireff. “If it’s a cold spring, we might not be out until June, and that’s lost revenue. If it’s a cold fall, there’s a huge drop in foot traffic. People don’t want to go outside when the weather is bad. This year, with its long dry summer, was an outlier.”

Spurred, in part, by that reality, a significant number of Alberta food-truck proprietors, especially those who made up the first wave of trucks in the late 2000s, used their vehicles as stepping-stones to more permanent accommodations.

Economics nudged Nevin and Kara Fenske to the world of mobile eateries, as well.

“Our truck was actually ‘Plan B,’” recalls Ms. Fenske. “We wanted to open a restaurant, so we put a bid on a building, but it fell through.” The husband and wife team instead opened Drift, one of Edmonton’s first curbside food trucks, in 2011. Drift burst out of the gate as a favourite of the downtown lunch crowd, with daily queues of hungry patrons jostling for jerk chicken and pineapple sandwiches with a side of fries anointed with the Fenskes’ homemade ketchup. Drift is approaching its fifth year of service, but is parked for the winter, awaiting more agreeable weather.

The Fenskes, spurred by Drift’s success, finally secured a bricks-and-mortar space on Edmonton’s quirky 124th Street – right across the street from the building they bid on six years ago – and opened Dovetail Delicatessen in April of 2015. The truck is still operational, but the duo can focus fully on roasting meats and baking veggie tarts in their airy, warmly lit space instead of in a tiny commissary kitchen.

“It would have been a huge risk to do a restaurant right out of the gate. A truck is less risky,” she said. “It’s $100,000 for a truck, compared to hundreds of thousands for a restaurant.”

Like her Edmonton counterparts, Ms. Burthwright channelled her truck’s business toward opening a restaurant – BBQ by Jane Bond – to curtail restrictions imposed by her city’s capricious weather. “I always had a restaurant in mind,” she says, “but having the truck first was an advantage because the truck builds experience in a way that a restaurant doesn’t. You have to adapt to change very quickly.”

A fixed location isn’t the final destination for all trucks, though. Deb Lawton and Jim Nikiforuk, the pierogie-making power couple behind Calgary stalwart Perogy Boyz, have been pitched franchising opportunities from across Canada.

“I’m not sure we’d enjoy having a restaurant. It has a very different feel,” says Ms. Lawton. “We don’t like being tied to one location. You don’t get the same sense of community that you do in a truck. The food truck community is tightly knit here. We all know each other.”

A truck may be the most accessible point of entry for a chef wishing to launch a culinary business, but the cold reality of Alberta’s climate is that one must have a clear contingency plan to survive from one season to the next, especially when volatile economic conditions have reduced diners’ lunch money.

“The three-year hump is real,” says Mr. Boldireff, the S’Wich food truck chef, referring to the time it often takes for the average truck to turn a profit. “You need to get out there, build your reputation, and learn. Opening the truck was purely a business decision, but my heart’s in a restaurant somewhere.”

“We will absorb and adapt to whatever happens,” he says. “People eat when they’re happy, when they’re sad, and everything in between. The rest is irrelevant as long as you are making good food.”