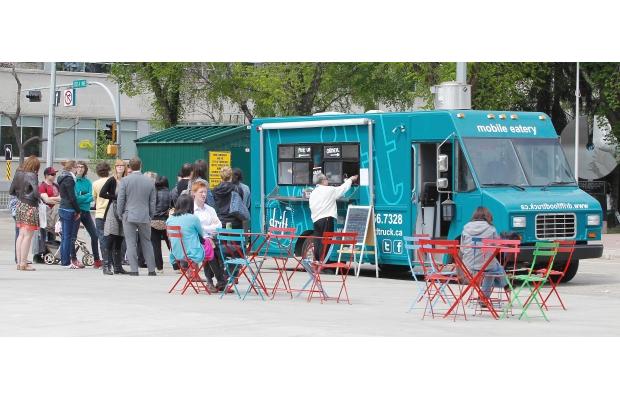 By Candice So | Edmonton Journal

EDMONTON – Drift Food Truck will be allowed to stay put and keep serving food on 108th Street and 100th Avenue, according to the City of Edmonton.

Nevin and Kara Fenske, the owners of the popular sandwich and fries outfit, got an email from the city last week saying they had just as much right as other businesses to be in that location.

In its email, a city official said Drift Food Truck was parked far enough away from the entrance of another restaurant.

The uproar over the food truck’s spot started in May, when neighbouring restaurant owner Jim Timmons said the Fenskes had been taking away business from his establishment, Grandma Lee’s Bakery Café. Although the truck had a permit to sell food at that location, Timmons wanted it to move.

In its decision last week, the city panel that considered the matter found Drift was not in conflict with Grandma Lee’s, which is located 65 metres away from the food truck, “well inside the Petroleum Plaza.”

Fenske said he was happy with the city’s decision, but he added the conflict with Grandma Lee’s highlights the need for more clarity on how street food vendors are regulated.

“I expect that by the end of the summer, food trucks are going to double or triple … It’s such a new thing that they don’t have guidelines in place,” Fenske said.

Earlier last week, Ward 10 Coun. Don Iveson asked for a report on whether the regulations surrounding street food vendors should be revised.