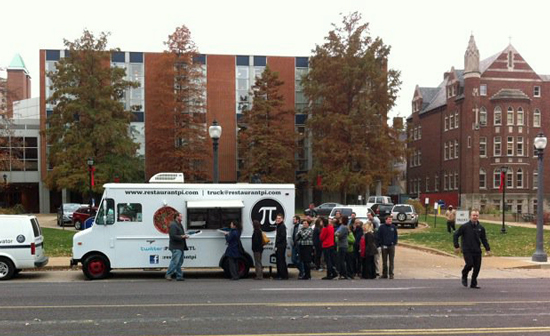 Alerted on Twitter, east-side Pi fans flocked to the parking lot of Fond restaurant to scarf down their choice of pepperoni, sausage, spinach-mushroom and tomato-basil deep-dish pizzas. The Edwardsville Intelligencer reported that the line wrapped around the building and the pizzas sold out.

The comments thread under the Intelligencer‘s Pi post, though, betrayed seeds of discontent.

“Why would the city of Edwardsville allow a out of town pizza place pull in a truck and serve lunch when we have locals trying to make a living doing the same thing?” asked the first commenter, presumably a local. (Brilliant deduction explained: He or she posted under the handle “Local.”)

“Which member of our county government has a financial interest in taking money spent in Edwardsville restaurants and sending it out of town?” chimed in the next commenter, “Lisa.”

Sure enough, trouble was brewing in little Edwardsville.

Subsequent commenters stepped up to defend Pi, chastising the naysayers for their parochial narrowmindedness.

Although the Pi truck’s Twitter feed assured enthusiastic Edwardsvillians that a return visit was scheduled for this Thursday, the pizzeria-on-wheels reversed course yesterday morning, re-Tweeting a message from a @Danco that reads: “The @PiTruckSTL has been banned from Edwardsville for being too popular. If you can’t compete with ’em, kick ’em out.”

Reached for comment, Pi co-owner Chris Sommers forwarded us along to Fond owner and chef Amy Zupanci, who’d invited the pizza truck to park outside her restaurant. In return for her Welcome Wagon treatment, Zupanci received a call from the health department yesterday, and an in-person visit from an Edwardsville police captain.

“The Madison County Health Department says they don’t allow trucks of any kind to serve food,” Zupanci writes in an e-mail. “However, they also have a policy of no inspection necessary as long as you have a health certificate for ‘non-consecutive food events.’ This would include festivals, farmers’ markets, etc., which may happen once a week, but not back-to-back days.”

Reasoning that under that definition the Pi truck is an “event,” Zupanci inquired about a so-called Transient Merchant permit but hit a dead end: The health department directed her to the police department, which informed her that permits involving food must be approved by…the health department.

Zupanci believes the Pi truck was ratted out by a rival eatery. “The public of Edwardsville showed how excited they were to see the truck and eat great pizza,” she writes. “Someone got their panties in a bunch because they are afraid of competitiion and called in the fuzz. Unfortunately, the current administration of E’ville cannot think or see outside the box and thus cannot just look the other way when cool things come to town.”

Pi’s Chris Sommers says he has encountered problems in certain parts of the St. Louis area.

“We have had trouble on Wash. U.’s main campus,” Sommers writes via e-mail. “We worked that out with them. We just need to be on private property across Forsyth now. We would love to be in Clayton, but they also have their head in a proverbial place and won’t allow us.”

Downtown restaurateurs don’t like the Pi truck either, Sommers says, but the city has not made an issue of it.

“The license collector did force us to move a couple of months ago,” he writes, “but the mayor’s office has convinced them to stop such nonsense until they can all work out proper oversight.

“The mayor’s office has been great to work with and is really being proactive in their approach to making the government and legislation work for trucks,” Sommers adds. “In general, we just operate with a ‘good neighbor’ policy and don’t encroach on other’s ability to conduct business. (For example, we won’t park in front of a pizzeria.)”

The difficulty dealing with Edwardsville and other small municipalities, Sommers says, is that there are so many of them.

Sommers notes that in Washington, D.C. — where Pi has opened its first far-flung outpost — the city has an entire web page devoted to food trucks in order to minimize the red tape.

We have a call in to the Edwardsville Police Department for comment.