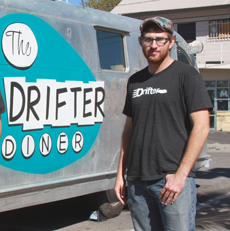 The Drifter, one of a few traveling food trucks that have taken to El Paso streets in the past year, is in the process of finding a place to call home. Since last July, devoted followers, hungry lunch seekers and those curious to try something new have kept up with The Drifter’s daily locations on Facebook and Twitter.

But drifting has turned out to be bad for business, said owner Ian Atkins.

“We found that people don’t want to look for us,” Atkins said. “The more we are in one place, it increases sales dramatically. It also helps the food be more fresh and gourmet if you don’t have to transport it around so much.”

Atkins and former partner Reed Hanson started The Drifter as a business venture last July in the hopes of kicking off a trend in El Paso where food trucks are common. Hanson has since returned to his previous day job.

Atkins referred to Austin as an example of a city where the food truck industry is booming.

“A bar in Austin can set up a food trailer in front that remains there,” Atkins said. “There are even food trailer parks, with seating and bathrooms and things. People support them there.”

Atkins said they were recently ill-received on El Paso’s Eastside. They set up at Johnson’s Jewelers on Zaragoza for their first Eastside trial.

“It was a disaster,” he said. “We didn’t sell one thing. The local businesses called the police on us, even though we had all the permits. Then to drive the nail in the coffin, someone cut us off and parked and we had to slam on brakes. It pulled volts out of the wall and we had to spend the next day rebuilding the trailer.”

Atkins said they have a new chef, Zach Aidelman, and have given their menu a Cajun focus.

Among their permanent location options are Hope and Anchor and a few other Westside (University area) bars, but they are working out the technicalities of obtaining a new city permit that would allow them to set up shop outside an existing business.