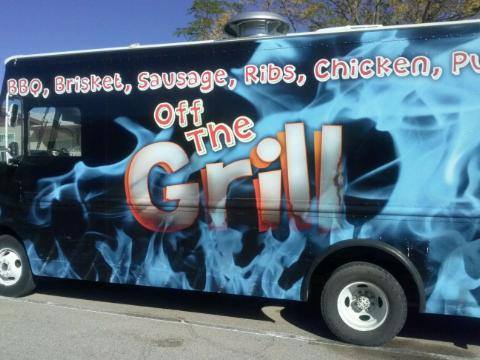 EL PASO, Texas – An El Paso teen with a dream has a chance to win a national contest.

The food truck Off the Grill is a nominee in an online contest for best barbecue food truck of the year.

Fans of the food were not surprised in the least.

“Once you’ve tried them you just can’t stop coming back to get more. Their food is done so professionally,” Guerra added. “It’s not like going to a food truck. It’s like you’re going to sit down at a restaurant and having something that’s of quality. It’s very delicious.”

“I’m dying to try their food right now,” said Martha Moreno. Moreno said she checked Off the Grill’s Facebook page for two weeks, waiting for the truck to set up in West El Paso.

It finally did Wednesday night, parking in the Toys ‘R Us lot on Mesa Hills Drive.

The food truck was the brainchild of Adrian Padilla.

“My junior year in high school, I dropped out,” Padilla said, adding that he received his diploma several months ago. “I knew what I wanted to do as far as owning a restaurant. I knew I needed to start small. So that’s why I picked a food truck.”

Padilla said his mom understandably wasn’t a huge fan of his plan. But she supported him and is now working with him in the truck, handwriting the menu each night and taking orders.

“She loves what I do,” said Padilla. “She gets to see where I’m taking the business and I bet she would never go back and say, let’s wait on this.”

The family’s work is paying off. The truck has been recognized locally in the El Paso Times’ Best of the Border contest. And Off the Grill is now in a national contest by mobile-cuisine.com, vying for the title of BBQ Food Truck of the Year.

“My big item is my brisket and pulled pork. Two top sellers,” Padilla said with pride.

Padilla has only been in the food truck business for less than a year. So he thinks winning the contest would equal big things for his business — and even the city.

“I want to show the rest of the world we have the best cuisine in El Paso, Texas,” he said.

Customers munching down on fish tacos and barbecue sandwiches agree.

“I think it’s something we as a city need to support and vote for him,” she added.

You can vote for Off the Grill here: http://mobile-cuisine.com/

Find where Off the Grill sets up nightly here: https://www.facebook.com/offthegrillfoodtruck