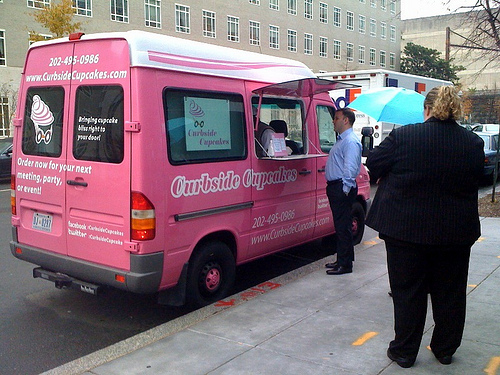 Back before our weather became a blunt instrument, battering us with its remorseless chill, the Red Hook Lobster Pound truck enjoyed a customer demand that had the depth and urgency of a Depression-era bread line. This month, however, the hungry masses that once huddled around this Maine seafood shack on wheels evaporated when a cold front dropped temperatures into a range better suited for antarctic mammals, not patrons of Washington street food.

Still, Red Hook’s sales in December have not declined dramatically compared with sales in the warmer months, says Leland Morris, president of Red Hook’s D.C. operations. He has a theory about that. “What I’ve noticed is strategy,” Morris says. “The line comes in waves now. . . . People watch from their offices, and when they see the line shorten, they’ll move down.”

Morris offers the explanation with such nonchalance that it has the ring of truth. Two days later, as snow starts to blanket the District’s streets for the first time this season, several customers outside the TaKorean taco truck on L Street NW confirm Morris’s theory.

“I work right up there,” says Daniel Mandell, pointing to an office building in the 2000 block of L Street. “I can see how long the line is. I waited until it was more reasonable.”

It would appear the District’s emerging food-truck market could use more persistent patrons like Mandell. If you discount Morris’s happy accounting – and even the Red Hook president will admit, when pressed, that the cold has had a “slight impact” on sales – many of the mobile vendors are hurting this month. Operators of four trucks say their sales have dropped by 40 to 50 percent from peak numbers. “My guess is most of these trucks are going to be losing money in winter,” says Justin Vitarello, founder of the Fojol Bros., whose own rolling empire is earning about 60 percent of its summer sales.

So why do these chuck wagons continue to roll during winter? Simple: They have bills to pay, such as commissary and vehicle storage fees, and people to keep employed. “The reason is to make a living,” says Mike Lenard, owner of TaKorean, “and for the people who work for us to make a living.”

It might not be clear from the streets, but mobile vendors such as Vitarello and Lenard serve a different kind of seasonal cuisine, the kind whose revenues fluctuate dramatically with the seasons. The businesses that occupy this unusual category typically have been ice cream parlors, frozen yogurt shops and the like, but with more four-wheel eateries roaming the streets, the group now includes food trucks, no matter what they serve. What’s more, their seasonal economic disorder is complicated by something that often gets romanticized by the media: Many food truck operators have no experience in the hospitality business.

The D.C. Department of Consumer and Regulatory Affairs has long known that. One DCRA official, in fact, told me last week that, historically, almost nine of every 10 new street vendors have no business experience. They just have an idea – and ambition. That can be a problem when it comes to budgeting for, and surviving through, the lean seasons, when revenues shrink but expenses don’t. Starting early next year, though, the DCRA will launch its Small Business Resource Center, a private-public partnership that will bring together local nonprofit and economic development groups to help new entrepreneurs map out their future and perhaps even get them through tough times.

Coming to grips with the limitations of mobile vending is enough to make the average food truck owner issue a small, bitter laugh. Why not? As the hired guns for bricks-and-mortar restaurants continue lobbying the D.C. Council for ways to neutralize what they say are the food trucks’ “unfair advantages,” these street operators continue to contend with elements that few restaurateurs ever face. Such as workplaces where the temperature is only a few degrees warmer than the air outside. Or customers who don’t want to feel their faces turn numb just for the opportunity to buy lunch.

One of the recurring issues for truck operators during winter – aside from updating their menus with soups, chowders and other warming dishes – is the status of their ordering windows. Should they remain open, which allows the frigid air to whoosh into the vehicle, or should they be shut when no one’s in line? It would seem like a no-brainer, right? Shut that sucker tight and stay warm. But operators say it’s not that simple.

“If the window is closed, the message you’re sending is that you’re closed for business,” says Kristi Whitfield, co-owner of Curbside Cupcakes. Only the most seasoned food truck customer or someone seriously hankering for a cupcake will dare approach a closed window, she says, a fact that can affect the bottom line.

For that reason, most truck workers keep the window ajar, which forces them to find other ways to seek and retain heat. Most operators adopt Whitfield’s approach of dressing in layers. On a particularly frigid Saturday this month, Whitfield swears she sported six layers of clothing under her apron (although she admits her wardrobe was largely dictated by the fact that she also had to work the downtown outdoor holiday market). Those extra garments can have their drawbacks. Ask Fojol’s Vitarello, who had to affix his trademark fake mustache over a ski mask.

Others, such as Stephan Boillon, the owner and chef of El Floridano, rely on the heat generated by griddles and steam tables to keep warm. Boillon’s case might be the most extreme. Because he installed solar panels to run his kitchen, allowing him to turn off the truck’s engine and save fuel costs, Boillon cannot rely on the vehicle’s in-dash heater to provide extra comfort. It can get cold fast in his truck, but the owner has devised a solution: He shuts off the kitchen’s exhaust fan for a couple of minutes. “It heats right up,” he says.

Such improvisations could help these curbside restaurateurs survive the coming months. They might even help them thrive, if you consider Vitarello’s story. Last winter, during Snowmageddon, the Fojol Bros. truck found a way to navigate the clogged streets between its Hyattsville commissary and Dupont Circle, where it was one of the few operations selling food to the snowbound. Vitarello hawked 120 meals during one lunch. “The winter can play to your advantage,” he says.

Of course, what should not be lost in this discussion of food truck operators braving the cold is the fact that they are not the first street vendors to suffer through Washington’s winter. They’re just the ones who attract the attention of media-savvy foodies. Vendors such as Ethiopia Asreshegn were huddling against the elements long before the gourmet food trucks stormed into town. Asreshegn has been squatting at the corner of 12th and L streets NW for a dozen years now. She operates a hot dog cart, that clunky symbol of street food’s past.

Inside her cart, Asreshegn has sealed herself off from the cold, her window shut tight. No one, I’d venture to guess, thinks she’s closed for business. I ask her how much she has made today while sitting inside her frigid tin can, her skin buried underneath three sweaters, three pairs of pants and a puffy parka.

“$50,” Asreshegn says. So why do you do it? Why not just stay home and stay warm? Her answer mirrors those of her motorized peers. “I don’t have a choice,” she says. “I have a family.”