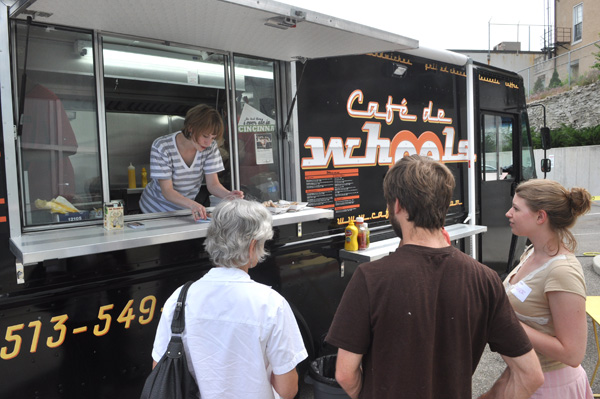 Food trucks may sound like fun and fancy-free business operations, but strike up a conversation with Tom Acito, veteran burger-slinger and proprietor of Cincinnati’s original food truck Café de Wheels, and he’ll give you an earful.

“It’s a dubious honor to be the first,” Acito says. “People call me, asking me questions, looking for advice on opening a truck. What I tell them is: it’s a battle every day.”

Acito and his nomad-like brethren have chips on their shoulders, real skin in the game and a cult-like following. They spend their days and nights competing for parking spots and serving up eats from walk-up windows.

Together, they’ve created Cincinnati’s own gritty, food truck subculture, where there are few avenues of support and even fewer guarantees.

Most cities with vibrant and thriving food truck communities, like Los Angeles, Miami and D.C., are home to hundreds of mobile food vendors and boast programs that seem downright storied in comparison to Cincinnati’s.

“You’ve always got to worry about the police showing up,” Terri Wilson of Pizza Bomba says. “Even though I know I’m completely in the right, you never know.”

The red-bandana-wearing Acito has a right to some of his hardened, glib demeanor—as Cincinnati’s food truck pioneer, his road hasn’t always been the easiest to travel.

After relocating from Dallas, Texas, to Cincinnati for a job that didn’t work out, Acito decided to pursue his mobile culinary dream. As the first of its kind, however, Café de Wheels seemed to find every stumbling block along the way.

There are some tough realities associated with cooking up gourmet food on the go.

Even for those who pay the $1,000 fee to belong to the city’s Mobile Food Vending Pilot program, parking spots are on a first-come, first-served basis.

Out of 10 trucks in the Mobile Food Vending program, the four who make it to the most lucrative downtown lunch spots adjacent to Fountain Square first are often the winners. Still, the Square is a busy place nowadays, and parked construction equipment or a 3CDC event that occupies the loading zones (which also happen to be the designated Mobile Food Vending spots) can ruin even the most carefully laid lunch plans.

“Unfortunately we’re losing the 5th and Race lot, which was the main place for awhile for a good thing, a huge development with Dunnhumby,” says Cincinnati Councilwoman Laure Quinlivan, who has positioned herself as a political champion for food trucks in the city. “We were trying to replace those spaces around the Square, but there’s been a bit of back and forth with 3CDC and conflict over loading zones for Fountain Square events.”

As a result, food truck operators find themselves at the mercy of more elements out of their control than even the most touch-and-go brick-and-mortar business.

They’re betting on good weather, that customers will find them and, at events and festivals, that they’ve estimated and prepped the amount of product they’ll need on the truck.

When your entire operation is contained within an 18-foot step truck, there’s no on-site walk-in freezer to save the day if you sell out early.

“The first year is just a learning curve,” says Gary Sims, part owner of Taco Azul, Cincinnati’s only authentic taco truck. “You’re spending most of it just learning from your mistakes.”

Unlike their brick-and-mortar counterparts, food trucks have to find a spot to park before they can do a dollar’s worth of business. While work week lunch is always a challenge, the advent of communal food truck spaces, like Night Owl Market (NOM) and Park[ed], by The City Flea, is making catering to the weekend, evening and late-night crowds a little easier.
The dedicated spaces occupy private parking lots and were organized by food truck fans.

NOM—organized by P&G employees Nadia Laabs and Sally Yoon—convenes in the lot at the corner of Central and Main, while Park[ed]—the brainchild of City Flea organizers Nick and Lindsay Dewald—is located just adjacent to Washington Park in the lot for Emmanuel Center on Race.

“We had a blast and did really, really well that night,” says Emily Frank, proprietor of grilled cheese truck C’est Cheese, on her latest NOM experience.

While the evolution of these new, regular locations contribute to the stability of the food truck scene, proprietors face difficulties that can crop up at a moment’s notice, including ongoing vehicle maintenance.

As Terri Wilson, half-owner of the rolling pizza kitchen, Pizza Bomba, puts it, “Every day is an exciting adventure in what will break down today.”

Breakdowns aren’t always mechanical. Consider food truck owners’ sometimes strained relationships with City Council and urban development organizations like 3CDC, plus inconsistent communications between those who make the regulations and those who enforce them.

The instability of the downtown scene is in part what keeps Curtis Bonekemper of Bone’s Burgers tucked away in the northern suburbs. The bartender and server who spends his evenings working at Eddie Merlot’s has a commissary based out of his house in Loveland and doesn’t see any reason to leave the area.

With an endless supply of business parks and no shortage of private events where he can serve up his grass-fed beef burgers, Bonekemper’s business model is significantly different than his urban counterparts.

“The added expense of time, propane, employees, gas, wear and tear on the truck, plus the $1,000 permit, to me, that’s silly,” Bonekemper says. “When I can operate up here and vend to private businesses without any money changing hands, it just didn’t make sense for me.”

No matter the business model, owners agree that the biggest challenge that plagues Midwest food trucks is the region’s unpredictable and unforgiving seasons. The food trucks of the booming Los Angeles and Miami scenes just don’t have the same long stretches of inclement, unfavorable weather.

“In the winter you face more challenges because you can’t operate the hours you used to, and people don’t want to come out in the cold,” says Fallon Horstmeyer, owner and operator of the eclectic quesadilla Airstream trailer, Turophilia. “And the heat—the record temperatures just drove business away this year.”

As Café de Wheels approaches its three-year anniversary, it’s easy for Acito to reminisce wryly. “We opened in the cold December of 2009,” Acito says. “We did $75 and thought we were slammed.”

For this cold December, Acito is embarking on his first attempt at a stationary restaurant to help supplement income during the off-season. He calls it Base Camp 1.

“I feel like we should be doing better than we are, which is why I’m really excited about doing the restaurant,” Acito says. “If it ever comes down to just not doing a food truck… I guess we’ll see.”

For Acito’s wheel-less venture he’s taken over the kitchen at Dive Bar on Short Vine in Corryville. It’s a mutually beneficial arrangement—he’ll serve up sustenance to Dive Bar’s hungry patrons.

Café de Wheels isn’t the only truck making an attempt to put down roots. Horstmeyer, proprietor of Turophilia, also hopes to supplement her mobile business by opening a brick-and-mortar establishment.

During the past couple of winters, she’s prepared food for bars in Over-the-Rhine, but now she feels ready to operate her own space, also in Corryville. She hopes to open soon in the now-defunct Subway space across the street from Dive Bar on Short Vine.

“It’s nice to serve indoors so new people who couldn’t come downtown for lunch, have opportunities to try your food,” Horstmeyer says. “I guess I just didn’t originally consider winters. I kind of had to adapt, and I’ve just realized that this is the next step to survive.”

Cincinnati’s newest truck, C’est Cheese, at just a little over a month old, is already contemplating a winter plan. Owner Emily Frank forged a fast partnership with Sarah Bornick of Streetpops, a fellow mobile vendor in cart form, with a prime, new storefront on Main Street in OTR.

Frank, like most mobile vendors, hopes for another mild winter. Though she plans to be out in her truck for as long she can, she’ll also serve soup and sandwiches out of Streetpops.

Yet another food truck staple, New Orleans to Go, is also going brick and mortar, opening a bistro space in an office building in Blue Ash after Labor Day.

There’s no doubt that permanent physical spaces provide a kind of financial stability that even the most popular trucks can’t find exclusively downtown at this point. Those with the means are making the leap, settling down, and giving their wheels a bit of a respite.

“It’s a game of survival of the fittest,” Horstmeyer says. “You just have to keep adapting to new rules and regulations, and the weather, but it’s exciting to be a part of.”

Emily Lang, a devoted food truck fan, is a UC Journalism graduate and a social media expert at LPK.