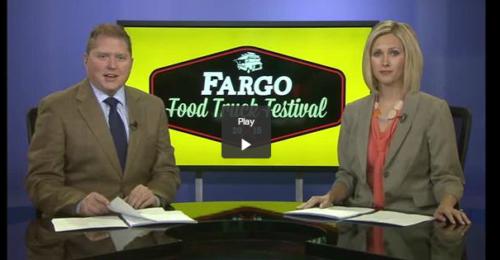 A food festival has rolled its way to Fargo.

The second Fargo Food Truck Festival has been going on all day at the North Dakota Horse Park.

The sound of hot grills has taken over the North Dakota Horse Park.

Dan Klein and his family drove from Valley City just for this festival.

“My wife, her birthday was on Wednesday, and so a few weeks ago when she saw this was coming she had said we have got to go to that for my birthday and so we decided we would come down and take in the festival,” Klein says.

And there are lots of trucks to choose from.

“You get kind of like that nice taste of comfort home, you know food that everybody likes like bratwurst and prime rib sandwiches and things like that. There’s even a Norweigian truck over there, too,” says Lance Myxter of Fargo.

This is where the magic happens. Vendors are able to turn the small amount of space inside a truck like this into a full-service restaurant.

“We’re a little slower than the coast to pick up the trends but when we do they sure take on,” says North Dakota Horse Park General Manager Mike Schmitz.

If this food truck festival sounds familiar, you’re right. Fargo held the first of its kind in 2013 but it wasn’t very successful.

“It’s been a good chance to re-brand it and regrow it. Two days I think is a way better option than just one,” Schmitz says.

And despite the wind, it worked. In fact, the festival was so busy that the food truck vendors like Prime Time Sandwiches didn’t have a single break to do an interview with us.

So whether you’re looking to heat up with a brat or cool down with lemonade, the Fargo Food Truck Festival has something for everyone.

The Horse Park will also be hosting its first ever flea market.