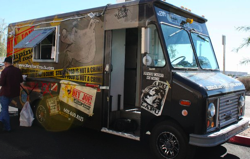 PHOENIX, AZ – Brian Webb did not only fall in love with his wife Margita when he went to the Philippines in 2009. He

“I really like Filipino food. I’ve been a chef for 10 years and when i flew over to Mactan Island, i really fell in love with the food barbeque pork & lumpia.”, said Webb.

His wife Margarita said that right then and there they thought of putting up a food business in the US.

That plan was recently put in action. They started a small enterprise that sells Filipino street food.

That’s fertilized duck egg, boiled with a nearly developed embryo inside the shell.

“One of the main reasons I chose to do a truck is because I want to bring the street food to the streets. Also Filipino food being unknown, I’m able to go to the customer and people are more willing to try the food that they wouldn’t have tried before.” , Webb said.

They gave their business the name ‘Hey Joe’ and the food truck has been in town for over a month. It has since gained a lot of attention.

“Some Americans they come down, its like a challenge for them. They come down just for the balut.” , Webb added.

The enterprising couple’s ultimate goal is for Philippine cuisine get into the mainstream. They believe that by going around town in a mobile Filipino food truck, they’ll be able to achieve it.