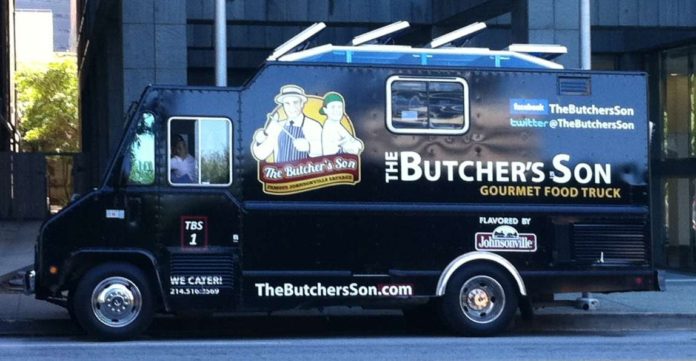 The Butcher’s Son concept comes from Two Trucks LLC, a partnership of Pool’s Restaurant Group and Johnsonville Sausage.   This is their first truck. Number two starts next week and they plan to have five on the streets by February 2012.

And while it might sound like it’s just a brat truck, The Butcher’s Son is the first truck in Dallas that has something for everyone, from kids to seniors.  Yes, there are a few (okay a lot) of sausage items on their menu, but if “Powered by Johnsonville” wasn’t on the side of the truck, you would think this was a Midwest comfort food truck.

I met Dain Pool and Jon Wagner, the son of the founder of Johnsonville Sausage, on a side street in Dallas and sampled my way through their menu.  Although Johnsonville Sausage is based out of Johnsonville, Wisconsin, Dain and Jon said that they wanted to launch in Dallas because of the burgeoning food truck market.  In our recent post highlighting the new trucks coming out, we printed the entire menu for TBS.  There are big, hearty breakfast selections, brat sandwiches, tacos and quesadillas, and entrees for the entire family.

South of the Border Breakfast Sandwich

Take a look at this menu (click for jpegs: breakfast, sandwiches, entrees, sliders, quesadillas, desserts) and imagine how full I was after eating my way through over half a dozen items.  I started with their “South of the Border” breakfast sandwich.  This sandwich could define comfort food.  Chorizo sausage, scrambled eggs, and black bean salsa on a soft baguette.  Do I need to add more?  This one was the winner for me.

Next I dove into the “Live from NY” which consisted of pastrami, fried eggs, and cheese on a Kaiser roll.  It was good, but it was tough to live up to the “South of the Border” breakfast sandwich.   It was a little messy as well.

I moved on from breakfast to the lunch/dinner sandwiches with the Famous Double Brat.  While Gandolfo’s menu will transport you to New York, this double brat sandwich will send you to Green Bay, Wisconsin.  It’s spicy and heavy, so bring a big, empty stomach.  Next, the Italian sausage added some great flavor to The North East Classic.  From the sliders menu, I tried the Southern Bell and The New Frontier.  While both of these were OK, I would go with The Butcher’s 3-Way to try these two sliders along with “The Longhorn”.

I tried the Hot-n-Spicy Quesadilla, a traditional quesadilla delivery mechanism that works well for a food truck.  This particular quesadilla came with chorizo sausage, braised Mexican beef, jalapenos, onion, and pepper Jack cheese, bringing some nice heat.  All in all, it was one of the better quesadillas that I’ve had in Dallas.

TBS didn’t have the stuffed bell pepper, the braised Mexican beef, or the currywurst bratwurst for the tasting, so there were a few things that I couldn’t get to.  They’ve got cake pops for dessert as well.

TBS’ first public showing will be Wednesday in the Arts District for lunch, followed by Sigel’s on Greenville for lunch and dinner on Thursday. 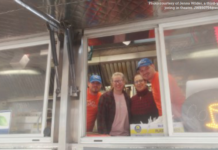 West Chester, PA: Greece, but not greasy: a look at the Greek Express food truck 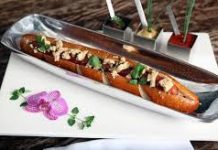 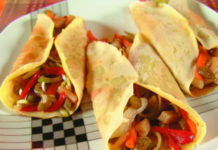