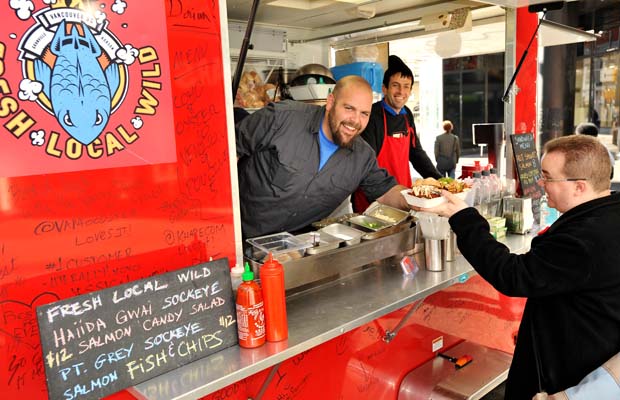 Josh Wolfe, who’s cooked for Queen Elizabeth and former U.S. president Bill Clinton in previous East Coast jobs, says it was the toughest decision of his life. When I visited Coast restaurant, which he helmed, I declared his crab cakes were the best I’ve had, no small declaration for a crab cake devotee.

He went down-market, he says, to focus on his passion — fresh, local and wild foods. In fact, that’s what he and partner Andy Fielding called the street food cart they opened in downtown Vancouver a few weeks ago. Fresh Local Wild. “It’s ironic. I’m in the fast food category now. How hilarious is that?”

In this city, all we’ve known of street food until recently has been hotdogs, chestnuts and popcorn. But of late in North America, street food has busted out that rut. It’s expensive to open a restaurant, but a cart or even a catering truck — well, that’s doable. Wolfe’s gregarious nature fits the role, too. Just watch him “joshing” with customers as he’s cooking up an oyster po’ boy, venison burger or salmon burger, all B.C. or locally sourced.

He’s not the only chef taking to the streets. At Roaming Dragon, chef Don Letendre once presided over the food at the soigne Opus Hotel. Now he’s creating pan-Asian street foods, served from a red catering truck on Georgia Street. Most of these carts and trucks prep the food early in the day at a commissary or commercial kitchen. Wolfe and Fielding, in fact, built their own commissary and lease part of it out to other cart owners.

Across the street and downwind from them, Cartel Taco, a trio including the chef and sous chef at Bao Bei (yum!) and a partner at Abigail’s Party restaurant hawk very good Korean-slash-Mexican tacos. In fact, it borrows the concept from one of the most popular food trucks in Los Angeles, Kogi BBQ.

Some vendors are a little nervous about the bottom line. Vicky Tran, one of the owners of Poke’m, sells Asian meat and fish balls on skewers with a choice of six sauces. She dreamed of running a street cart long before Vancouver’s pilot program began.

“I have a passion for food and travel. I’ve been to Asia to check out the street food and was planning on something like this way before the city started the program.”

“We haven’t broken even yet and hopefully things will turn around. Our food is completely new to Vancouver. A lot don’t know what Asian balls are about.” Their cart cost $15,000 and they’ve been open since Sept. 4.

A couple of carts have been and gone. Chinese Skewer King, which resided at Burrard and Hastings, is gone and I noticed the cart was for sale on craigslist. A falafel cart which operated at Main and Terminal is also gone. Some vendors keep their fans in the loop through Twitter and Facebook. Others are harder to keep track of. Some days they’re there and others, they’re missing in action. In this age of Twitter, Facebook and websites, how hard can it be to post once a day?

I’ve visited most (not all) of the trucks and carts and here are my reviews, listed below in alphabetical order.