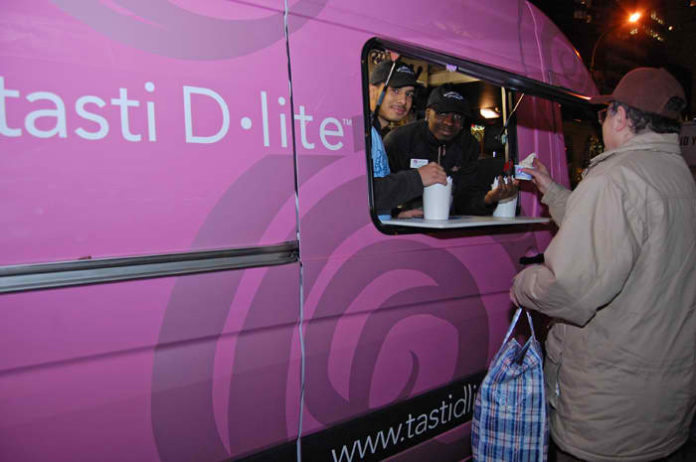 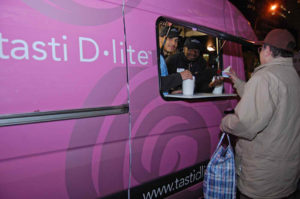 A small but growing number of chains—such as Cousins Submarines Inc., Tasti D-Lite LLC and Toppers Pizza Inc.—are following in the tire tracks of those local food-truck businesses popping up on city streets around the U.S. Many brick-and-mortar eateries have added mobile units in recent years, and more are expected to do the same, including national brands.

“By the end of next year, you’ll begin to see some big brands rolling this out,” says Robert Stidham, president of Franchise Dynamics LLC, a Homewood, Ill., company that helps businesses develop franchises. Mr. Stidham says he’s been involved in “serious” discussions with about a half-dozen national food franchises on strategies for going mobile. He declined to name specific chains. 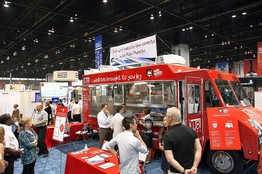 For the first time this year the National Restaurant Association set aside space at its convention for exhibitors catering to mobile food vendors. 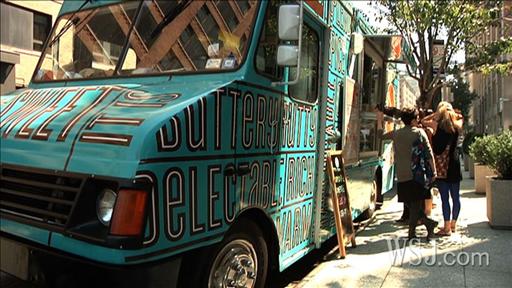 As the number of New York City’s gourmet food trucks increases, drivers are becoming more competitive about real estate. After a recent ejection from a popular midtown location, some drivers are considering a union. Matthew Rivera reports.

Over the past year in New York, mobile food outlets like the Big Gay Ice Cream Truck, Street Sweets and Schnitzel and Things have pushed street to knew heights! 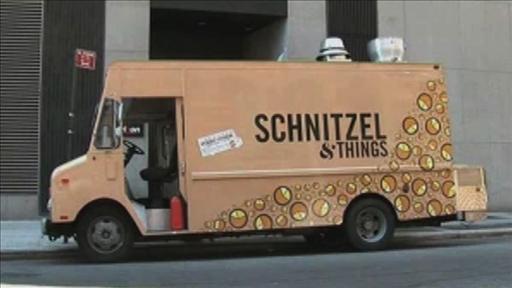 Trucks or vans outfitted with fully operating kitchens, as opposed to the small, engine-free carts used by street vendors for more than a century, were a rarity until only a few years ago. Now they’re commonplace in cities such as Los Angeles, New York, Philadelphia and Portland, Ore., says Sean Basinski, director of the Street Vendor Project at the nonprofit Urban Justice Center in New York. It’s unclear just how many exist nationwide, but in New York, where year-round permits are limited to about 3,000 street-food vendors, he says the waiting list is at least 10 years. The city declined to confirm the waiting time.

Sites like Twitter, Facebook and FourSquare are making it easy for consumers to track mobile vendors’ whereabouts, says Hudson Riehle, senior vice president of research for the National Restaurant Association in Washington, D.C.

The trade group dedicated a 1,500-square-foot section of its annual convention this year for the first time to exhibitors that cater to mobile-food businesses.

Food trucks are a natural fit for many franchises, says Alisa Harrison, a spokeswoman for the International Franchise Association, a Washington trade group. “It’s replicable, which is one of the most important things about being able to franchise a business,” she says.

Mr. Webster, a former investment banker, uses the van to sell ice cream mostly at community events and for catering jobs. He says mobile sales account for less than 2% of total revenues for his businesses but that the van is helping to raise brand awareness. “It’s really a roving billboard,” he says.

Mr. Webster is currently the only Tasti D-Lite franchisee with a mobile unit. But Bill Zinke, chief marketing officer for Tasti D-Lite corporate, says the Franklin, Tenn.-based company plans to have at least 10 more on the road by the end of next year.

It will sell the vehicles fully outfitted to franchisees as a tool for supplementing stores. Franchisees will be required to pay the same royalty and marketing fees for mobile sales as they do for store sales, he adds.

Other franchise companies say their concepts can work as standalone mobile units independent of brick-and-mortar stores. In August, Mauricio Acevedo, owner of BannaStrow’s USA LLC in Miami, began offering prospective franchisees the opportunity to run the crepe chain out of two different size trucks, one that sells for $80,000 and another for $150,000. Both price tags include the cost of the franchise itself.

BannaStrow’s hasn’t yet sold any of the mobile units. In business since 2003, its four franchisees operate out of kiosks and small stores inside shopping malls that cost upwards of $150,000. “Our franchise concept is flexible,” says Mr. Acevedo, since the company’s crepes require minimal ingredients and just a griddle to cook. “It allows you to be in many places.”

Franchisors are also investing in food trucks to promote the launch of new and upcoming stores. Toppers Pizza, a 28-unit pizza-delivery franchise based in Whitewater, Wis., bought two in recent years for this purpose, says Scott Iversen, director of marketing.

Food-truck owners—whether they are franchisors, franchisees or others—face a number of challenges. Some cities restrict where food trucks can operate. In cities that don’t, new competitors can pull up in those places at any time. Inclement weather can also damp sales and put vehicles at risk of being damaged in an accident.

Thomas S. Jones and his sister, Cheryl Jones, use two food trucks to supplement sales for four Cousins Subs restaurants they own in south Wisconsin. Mr. Jones says they have regular customers who expect their vehicles to show up at an office park every weekday around lunchtime—and so taking a day off isn’t an option.

“These guys are depending on you for lunch,” says Mr. Jones, adding that mobile sales of premade sandwiches, drinks and cookies account for 5% to 10% of annual revenue for all of their businesses combined. “I treat those trucks like a store. Never once have I not put them out there.”