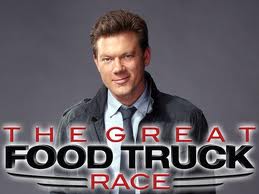 Warning: This article will make you hungry.

Host Tyler Florence brings eight of the top food trucks in the country to your TV screen, as they battle for a life-changing $100,000 grand prize, double the cash prize awarded in season one.

The trucks spend one wild weekend in each city not only selling specialties from their mobile kitchens, but also competing in extreme challenges like butchering their own meat for barbecue in Memphis and foraging the mountains of Denver for wild mushrooms.

In the end, culinary chops, strategy and moxie will determine who wins the ultimate food truck prize.  The seven-episode series premieres on Sunday, August 14th at 10pm ET/PT, after the finale of Food Network Star, and beginning the next week will air in its regular timeslot Sundays at 9pm ET/PT.

This season’s competitors include:

This truck serves up late-night authentic Cuban food on wheels with boisterous personalities and a go-getter attitude. Gabriel Martinez, Maria Felipe and Frankie Tosta bring the fun with passion for their Cuban heritage and inventive mindsets to intimidate the competition.

This truck got its start when the trio found themselves in Los Angeles without a late-night spot for café con leche or Cuban sandwiches and took matters into their own hands. With founder Gabriel’s café con leche recipe, Maria’s salsa dancing and Chef Frankie’s experience, this truck has been a party ever since wheels started rolling.

This truck serves up insanely evil comfort food and irresistible combinations with dishes so good, they’re bad. Best friends Dyann Huffman and Kristina Repp quit their jobs and opened the truck with their culinary expertise, while Dyann’s fiancé Mark Manning is the duct tape for not only the truck but the ladies themselves. The team cooks their way across the country with dishes like fried mac & cheese balls with bacon – and they are determined to take their truck to the top.

This truck’s owner Chris Hodgson opened his first food truck (Dim and Den Sum) on a dare, and Hodge Podge is his latest creation. Chris started his food trucks before there were laws or permits in Cleveland for them, but his magnetic personality and chef skills made his food an overnight sensation. Working with his sister Catie Hodgson and long-term girlfriend Jacquelyn Romanin, the team brings “the best in the Midwest” to the competition.

This truck, which stands for Korean + Grill, is the brainchild of Columbia University graduate Edward Song. After graduating during the country’s economic downturn, he found himself thinking outside the box – unexpectedly enrolling in cooking school and taking his passion for Korean food to the streets of New York City.   His high school friends Stephan Park and Paul Lee have been with the truck since day one, and together they have made Korean food accessible to the masses in a fast and convenient way.

This truck is run by a trio of young, passionate foodies from Orange County, has a unique concept with no set menu, other than a few staple dishes.  Owner Daniel Shemtob, along with Jason Quinn and Jesse Brockman, has gained a big following in Southern California with this exclusive, gourmet restaurant on wheels.  Fiercely competitive, these confident 20-somethings want every diner to leave the truck with a smile and a full stomach – but they also want to win.

This truck is run by brothers/band-mates James and Mike DiSabatino, along with trained chef Marc Melanson, serves gourmet grilled cheese sandwiches and makes each dish an experience. While touring with their band, James and Mike sometimes lived off five dollars a day, so simple sandwiches became their dietary mainstays. These Boston hooligans have fun serving up their twist to the childhood classic, adding ingredients like guacamole and foie gras. Marc joins in with his ingenious grilled cheese creations, as the competitive trio vies to put Boston on the map in the food truck business.

This truck was created by Stephanie Morgan, brings healthy vegan options to the streets with their fresh and innovative creations. Along with Nicole Daddona and Chef Raya Belna, these ladies are proving just how delicious vegan cuisine can be. The Seabirds are dedicated to using local organic ingredients to make their top-sellers, like Beer Battered Avocado Tacos and BBQ Jackfruit Sandwiches.  This all-girl team is competitive by nature – and ready to bring amazing vegan food to the masses.

This truck is known for its “Mexican food with a splash of soul,” is the creation of Barbara Burrell, a former corporate executive who literally followed her dreams into the food world.  Joined by Barbara’s son Victor Burrell and business partner Kevin Minor, “the sky is the limit” for this truck as they serve their signature shrimp tacos and other delicious creations to their Los Angeles customers. Ready to bring their cooking cross-country, the team pushes their business ahead with determination and excitement.

In the season premiere, Tyler greets all of the teams at the picturesque Malibu Pier and sends them on their first Truck Stop Challenge: to create an inventive dish with one lobster and all the farmer’s table ingredients they can hold.

After award-winning chef and food truck operator Susan Feniger chooses the winner, the trucks head to Las Vegas and are confronted with their first Speed Bump – Tyler spins a large wheel containing numerous food truck problems and lands on ‘out of propane,’ so the teams must proceed without use of this necessary fuel.

At the end of two days in Vegas, the team that sells the least is sent on the road home.  The cross-country route then takes the teams to Salt Lake City; Denver; Manhattan, Kan.; Memphis and Atlanta where the competition intensifies with more grueling challenges – leading up to the final battle between the two top trucks in sun-splashed Miami.

The voting starts on August 14th in conjunction with The Great Food Truck Race season two premiere, and the ultimate winner will be chosen via online and text message votes.  One lucky fan who participates in the voting will also win a trip for two to the Food Network New York City Wine & Food Festival, September 29th – October 2nd.

In 2010, almost 500 trucks were nominated and Big Truck Tacos of Oklahoma City was crowned the winner.

More information is available at www.foodnetwork.com/foodtrucks.