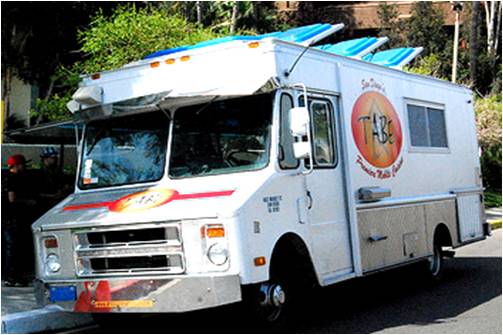 By STAFF | BY NUG MAGAZINE

San Diegans are accustomed to menus that fuse together the culinary flavors of different cultures in order to create unique variations of standard favorites. With the Tabe BBQ Food Truck, chefs have perfected the fusion of Korean and Mexican cuisine with their taco, burrito, and rice bowl options.

Tabe BBQ, pronounced tah-bay, is a derivative of the Japanese formal word Taberu, which means: to eat. Serving food on the streets of San Diego since November of 2009, Tabe BBQ has undergone menu and staff changes; but, the truck favorites responsible for their success have remained the same, joined by some new menu additions along the way.

Roughly a month before their grand opening, Executive Chef Todd Ichinaga established a partnership with Sunny and Osok Kwon. Current co-owner Rich Morris explained that Ichinaga, already an established culinary chef who worked at high-end places in LA, was able to fulfill his culinary vision thanks to the financial backing of the Kwons. However, in February of 2010, the Kwons decided to sell the business and Morris, along with his friend Matthew Gorton, jumped at the opportunity.

Morris and Gorton met in Hawaii at a tequila BBQ party on Oahu’s north shore during the summer of 1988. “I was cooking up some mean grinds using Asian flavors I learned during my travels as a merchant marine,” Morris recalled. “Gorton crashed the party, but our love for good food, drinks, women and local greenery – not necessarily in that order – cemented an instant friendship.”

A few years later, Gorton found himself working at San Diego restaurants, such as La Jolla’s George’s on the Cove, while Morris lived in Amsterdam and owned a small catering company. In 2003, reunited in San Diego, the two friends began a hot dog cart business in which they served up savory creations to late night partygoers outside of PB’s bars.

“By the time [the Kwons] realized that owning a food truck was much more work than they anticipated,” Morris said. “Matt and I had four cart locations, but we were looking for a truck and our own kitchen in order to properly expand. Tabe BBQ was the right fit for us because of its Asian and Mexican fusion; plus, so much of the food reminded us of the years we spent together in Hawaii.”

Ichinaga stayed with Tabe BBQ until March of this year, when his interests began to expand to other culinary challenges. Since then, Morris and Gorton were able to find a new chef to expand on Ichinaga’s menu creations and recently added a new truck to their fleet.

“Our current chef, Mark, has made our current menu better with his inspirational twists on food, like the best pulled-pork you will find anywhere,” Morris said. “He has the right amount of experience and foresight to help Tabe BBQ expand even further.”

Morris and Gorton’s goal for Tabe BBQ is to turn the truck into a franchise, so foodies in other cities can enjoy their Asian fusion.

Although their meat marinades are heavily influenced by Korean cuisine favorites, Tabe BBQ also serves Japanese and Hawaiian inspirations as well as twists on American comfort food favorites, like fries and sliders. Most of the ingredients are locally sourced and everything is created from scratch. The menu includes four meat staple options – BBQ Beef and Chicken, Spicy Pork, and Beer-Battered Fish – served as a taco, burrito or bowl.

“Our pork is cooked for at least 12 hours, our Bulgogi beef is marinated for at least 24 hours, and our chicken is seasoned before it is flame-broiled and then finished off with our own teriyaki glaze,” Morris said. “All of our salsas use the freshest fruits and vegetables from local markets and change depending on the season. We also prep and cook 90% of our food in the kitchen, where we can control the quality, and finish off the food in the truck right before serving.”

“Our most popular item on the menu is the OMG Burrito,” Morris added. “It comes with your choice of meat, fries, melted cheese and our own salsa roja, which is made with fire roasted tomatoes, tomatillos and red onions, and a touch of Korean chili paste and sesame oil. We wrap that all in a warm tortilla and after one bite of the gooey, spicy deliciousness, people say, ‘OMG that’s amazing!’”

We ordered the Cali Burrito, which Morris said was inspired by customer recommendations – it is also very similar to the OMG Burrito. It is a massive tortilla stuffed with your choice of meat (we opted for Spicy Pork), and instead of rice, it is filled with fries along with cheese, a Maui onion-jalapeno-tomato salsa, sour cream, and crisp lettuce. At no extra cost, rice can be added, which we opted for as well. It was delicious! The pork was moist and not too spicy, and blended quite well with the flavors of the salsa, fries and rice. Although it was large, we consumed it quickly – it was that good.

The burrito is likely the reason we were unable to finish our BBQ beef bowl. The bowl features a half-pound bed of steamed jasmine rice, barely visible over the large mountain of beef, and added sides of sautéed Kimchi veggies and caramelized onions. The beef was extremely tender with just the right amount of spice, which is enhanced if consumed with the Kimchi, but balanced with the onions. For those who like spicy, special Tabe BBQ sauces are also available upon request.

The burritos and bowls range from $6 to $7, while the individual tacos are $2.75. The menu also features fries, which can be smothered with any of their meats, and special sauces, as well as sliders and salads. Overall, Tabe BBQ is extremely affordable, and two can eat more than their fill for less than $15.

Follow Tabe BBQ on Facebook and Twitter to discover their daily locations; and if you try at least a taco, Morris promises you will not be disappointed. “The best compliment we hear from our customers is ‘this is the best taco I’ve ever had.’ Living in San Diego and being able to stun people with the different layers of taste that one of our tacos provides is amazing. With compliments like that, we know we are not wasting our time.”