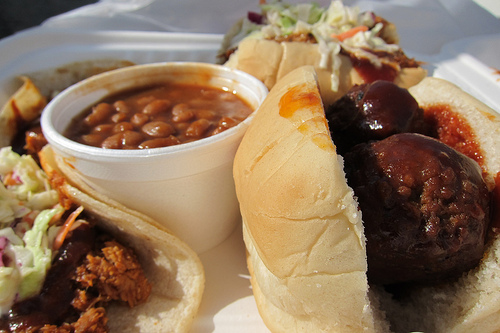 Smokin’ Willie’s (@smokinwillies) has existed as a truck since at least last summer, but it’s been in business as a producer of bottled sauces, books and grilling equipment since 2005. (1999, if you count their first aborted attempt to mass-produce and sell their sauce.)

The truck’s namesake, Bill “Smokin Willie” Kelley, is a veteran of both the banking and music industries. When Kelley was a kid in Lake View Terrace decades ago, his mother developed the sauce and sold bottles to support Kelley’s brother in his stock car racing career. A few years ago, Kelly brought in chef Michael Acuna to develop a successful manufacturing formula. These days, you’ll often find Kelly in front of his truck, handing out free samples of his chipotle chicken to pedestrians. If you know what’s good for you, you’ll take one. That’s not a threat, just a very strong recommendation. Smokin’ Willie’s specializes in “barbecue light.” No massive meaty beef ribs. No pork ribs so tender they practically fall off the bone. This is definitely Texas-influenced barbecue, with its sweet, peppery, tomato-based sauce, but it’s not regionally derived as much as it’s designed to appeal to as many palates as possible. This is definitely California-ized ‘cue, but it works. The menu features four basic meats — shredded chicken, spicy shredded chicken, pulled pork and meatballs — served as tacos ($2), sliders ($3) or full-sized sandwiches ($6-6.50). All of them are good, but the spicy chicken and the meatballs had us wanting seconds.

The meat is tender though only mildly smoky. (We wouldn’t mind a more intensely hickory or oaky flavor, especially since “smokin'” is right in the name.) It’s fine for the spicy chicken tacos — topped with a basic cabbage and mayo slaw — but the pulled pork is a little bland.

The meatballs are soft and juicy, covered in a sweet, dark brownish-red chipotle barbecue sauce. Obviously, there’s nothing “barbecued” about meatballs except the sauce, but this is no firepit in Tennessee. This is Sepulveda Boulevard in Van Nuys or maybe Wilshire Boulevard in front of LACMA. The meatball slider makes a perfect lunchtime snack.

If Smokin’ Willie’s has any downside, it’s that there’s not much variation in the sauces from meat to meat. The dominant flavor is chipotle, which seems to be in most everything. We like chipotle (and Chipotle) as much as the next fast-casual Mexican food-eating consumer, but it can be overused. Also, the baked beans taste like they come straight from a can — not that we care. We don’t stalk food trucks for their beans.

The Upshot: The best bet here is the $9 combo plate: two chicken tacos, a meatball slider, a pulled pork slider and a side of baked beans. It allows you to sample a wide array of Smokin’ Willie’s meats doled out in generous portions, making it a great value for your dollar. For a smaller bite, the $3 sliders are perfect but still generously sized.