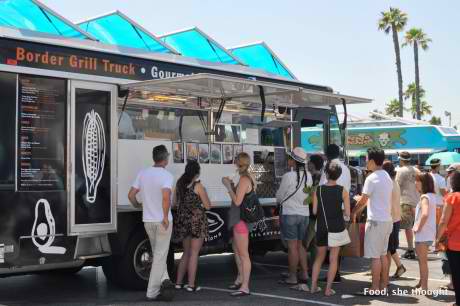 One of the most common, and sadly the worst misconception, about food trucks is that the food they serve is somehow inferior to the food served in a traditional restaurant. In theory, any traditional restaurant could design a vehicle to serve as a food truck and could travel the streets serving the exact same food found at their original establishment. And if there are any doubts about the feasibility of this idea, just take a look at the Border Grill Truck, which will be arriving at the Court of Sciences on Wednesday, Oct. 20. Unlike other food trucks, the Border Grill Truck is not an original eatery but instead is the mobile branch of the popular street food restaurant located in Santa Monica.

Border Grill’s cuisine makes the transition into the food truck world seamlessly, mainly because its food is based off of traditional Mexican street food. While there are an endless array of tacos and other fun finger foods to choose from, I personally am drawn to the avocado taco. I admit that I initially tried this taco because I am a sucker for avocado, but seriously, what taco lover isn’t? However, after seeing and consuming the avocado taco, I was floored by the creativity of this dish. The avocado is coated with a mixture of seeds and seasoning, then fried, creating a crispy texture to contrast its natural softness. The dish is not only avocado-centric in that the avocado is the biggest item in the taco but also because the other components are added to highlight it. The corn relish adds another dimension to its creaminess, while the pickled onions and chipotle salsa both contrast and emphasize its sweetness. Packaged in a crispy taco shell, the entire dish is a joy to eat. In essence, Border Grill’s avocado taco is a truly original creation.

While the Border Grill Truck may not be able to brag about being one of a kind, like other trucks can, they are still a truck worth trying. Sure, you could make the trip to Santa Monica and go to the actual Border Grill restaurant, but do you really have time for that between classes? Either way, you’ll be enjoying the inspired tacos of Border Grill on Wednesday, and that’s
all that really matters.

Until we eat again,
The Food Truck Junkie