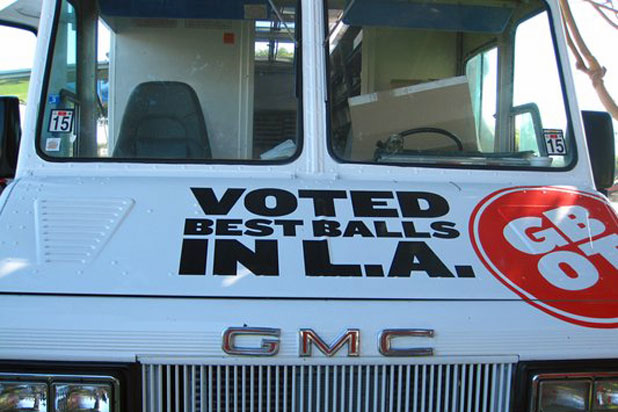 By Arthur Bovino | The Daily Meal

Food trucks are everywhere. Sure, some cities lag behind, and in others, laws prevent nascent scenes from taking off. But in major cities, odds are good that if you stroll down busy streets, you’ll stumble across a food truck (if it’s not Midtown Manhattan). Indeed, competition can be fierce. For this reason many incorporate gimmickry. Catchy names and witty slogans are effective ways to win attention. It’s also the only time you could name an eatery Shrimp Pimp or Me So Hungry, and expect business not just to survive, but thrive.

Still, some trucks take that license, that “I’m the youngest child and can get away with anything” entitlement up to the edge of tolerability when it comes to the realm of brazen, eyeroll-inducing, pun-upon-pun chuckling. There’s the almost-use of foul language, sex references, penis jokes, the point where your eyes roll around in your head so violently you almost think Tyler Florence’s ties from last season’s series of The Great Food Truck Race actually looked good. “Killer Street Food,” “Shrimpin’ ain’t easy, but it sho is fun,” “ Shut Up And Eat,” the list goes on.

In pictures: Food Truck Names That Should Be Banned

When it comes to food trucks, puns are without a doubt the most common rhetorical devices ever. Still, the sex-charged meat puns that “pop up” on the sides of food trucks catering to the masses are kind of endearing, even when they’re beyond the pale when it comes to being obnoxious, obvious, and completely over-the-line. Sure, there’s a sense of humor only teenage boys (or most linecooks) would love, but you have to appreciate the overboard qualities inherent to many food truck slogans.

With respect for the ridiculous, and getting away with what most serious restaurants would never consider trying, here are truck slogans and names whose cleverness and puns put them in a category of names that “should be banned” for being over-the-top and too good at their own game.