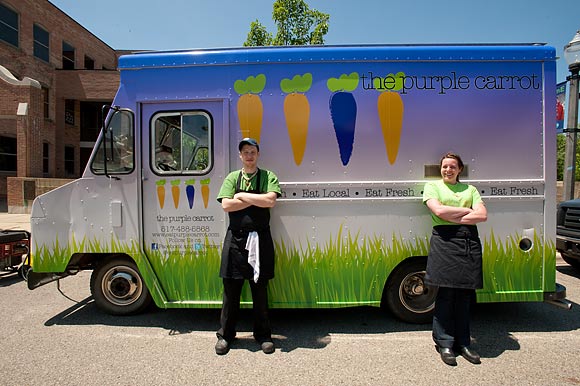 The Purple Carrot Food Truck is in the running for $10,000 and national television coverage with its nomination to appear on the Food Network’s “The Great Food Truck Race” in 2012.

The Lansing-area, traveling, gourmet food truck that serves dishes made with seasonal and local ingredients claims to be Michigan’s first farm-to-truck food stand. Purple Carrot co-owners Nina Santucci and Anthony Maiale plan to showcase Michigan’s agricultural diversity to the nation if voted to participate in the race.

The Purple Carrot was nominated to compete with more than 200 other food trucks nationwide. Supporters can vote for the Purple Carrot on the show’s website and are allowed 10 votes per day until Sept. 12. Votes can also be cast by texting FT147 to 66789.

“It was pretty exciting,” Santucci said of the nomination. “One of the big reasons we decided to open up a food truck was a direct result of the show.”

The top vote-getter gets $10,000, is named “America’s Favorite” food truck and is in the running to appear on the show, “The Great Food Truck Race.” As of 4:30 p.m. today, the Purple Carrot was in fourth place.

The show, which just started its second season, is a competition among food trucks that travel the country and compete to sell the most food, Santucci said. The winner of that competition wins $100,000.

With dishes such as blueberry soup and beet and goat cheese terrine, the Purple Carrot serves breakfast, lunch and dinner with a creative twist and changes its menu weekly to keep the taste buds of customers guessing.

If selected to participate in the race, the Purple Carrot will be paired with Earthy Delights, a Mid-Michigan based specialty food distributor.