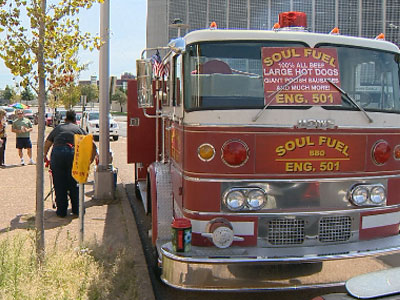 NASHVILLE, Tenn. – Soul Fuel 501, a fire engine renovated to be a food truck is generating a lot of attention when it parks in downtown Nashville.

“I thought it was firemen putting on some type of charity event,” said one customer.

“I just thought it was a fire truck and I saw smoke, so I walked over,” said another.

The Soul Fuel truck is parked along James Robertson Parkway and Fourth Avenue North every Wednesday, Thursday and Friday. They serve hot dogs, barbeque and southern fare from the back of the reconditioned fire truck.

The truck’s owner, Everett Burbridge said he was drawn to fire trucks after September 11th. He bought the fully functional 1967 fire truck from a volunteer fire department near New York City. Burbridge said the truck is now serving the purpose it was always meant to.

“The fire truck was made for this kind of work somewhere along the line, some body decided to put water on it,” he said.