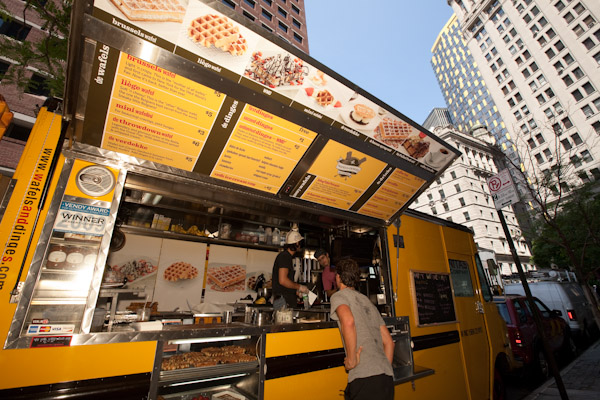 Now, largely due to social networking, new truck design and a sophisticated demand for certain ethnic dishes, food trucks are in, in a big way. Basically, a carry-over from early New York pushcarts, these sources of prepared food fill a void for thousands of homesick immigrants and seekers of new food experiences. Best of all, the truckers bring the food to high-traffic centers where busy people can purchase quickly.

Street food is ancient. In many cultures, generations of poor people depended upon street food for the whole family. Purchasing food at a market for a meal also meant buying more food than necessary for that day, an impossible luxury.

New York has a rich history of pushcart venders. Even Macy’s and Bloomingdales were regarded as vendors in their early days. In the beginning there were over 20,000 vendors, and it became increasingly difficult to regulate them. Finally, they were banished altogether in the 1930’s. Once re-sanctioned, the city capped the number of

vendors at 3,000. Up until the 70s operators were mostly Greeks, Afghans, Bengladeshis, Dominicans, Vietnamese, Brazilians and Columbians.

Traditionally, local government and individual vendors have had testy relationships, principally because the latter could move around, and quickly, if unfortunately necessary. Another obstacle for enforcement was the language and reading skills of the sincere venders extremely capable of cooking affordable, delicious, authentic foods from their homeland.

Thirty-seven years later, New York Magazine took a 59-Vender Poll poll of vendors and still more nationalities, asking them about their backgrounds and cleanliness. Many of the responses were silence out of fear. There are a lot of headaches for licensing a food truck. Here are some interesting links assembled by the Street Vendor Project and Urgan Justice Center in New York City.

In 2007, New York Magazine printed a list of the best food vendors:

Now fast-forward to 2011 and the leaping success of more luxury-like “pushcarts” catering to the non-poor and adventurous. These trucks have understandably angered brick and mortar dining establishment operators with high overhead and fixed expenses before they ever buy the food they serve. They now find themselves losing business to eager mobile, frequently novice, chefs with no land ownership, no advertising expense, no dining room maintenance, no menus to print and except for the food, no investment other than the truck, to protect. They also prepare far fewer menu items.