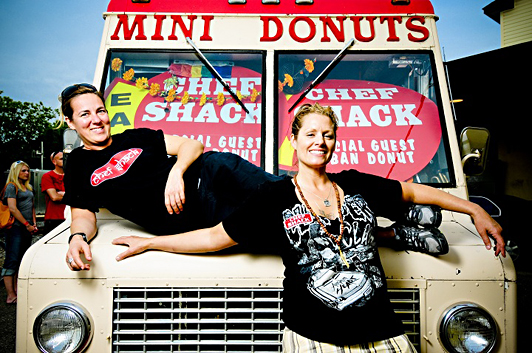 Most trends by their very nature tend to come and go, bursting on the scene white hot and just as suddenly flaming out. But certain trends stick, becoming game changers that fundamentally reshape the cultural landscape.

Gourmet food trucks started popping up in New York and LA a few years ago, with a handful of chefs of all levels of training serving gourmet treats out of refurbished carts, postal vans, and even old Mister Softee trucks. Instead of blaring Turkey in the Straw to announce their presence, though, these culinary Pied Pipers attract followers using Twitter and Facebook.

It makes sense that food trucks should have such staying power. Their low overhead makes it easy for cooks to experiment with new culinary concepts, satisfying our collective hunger for the next new thing. They also appeal to our growing mobility, and, let’s face it–eating banh mi or crème brulée on the street is just cool.

So cool, in fact, that food trucks are springing up everywhere and taking off in exciting new directions. Streetza’s truck is equipped with a 650º oven to give Milwaukee pizza some artisanal street cred. In the unlikely artist community of Marfa, Texas, Food Shark serves up Middle Eastern fare (including their signature “Marfalafels”) from a stubbornly unfancy truck. In Minneapolis, Chef Shack’s menu boasts tongue tacos, bison burgers, and goat’s milk ice cream, made with locally sourced ingredients. In our nation’s capital, On The Fly smartkarts go green, driving American-made zero-emissions plug-in trucks. Going even greener, some purveyors are abandoning trucks altogether for bicycles (like Popcycle Treats, which we covered here recently). And in yet another spin, Portland’s stationary carts are permanently set up on parking lots, creating alfresco food courts that draw native Portlanders and tourists alike.

Need further proof that food trucks have arrived? First, they now have their own iPhone app–RoadStoves uses GPS for real time food truck tracking. And the Los Angeles Times reports that mainstream chains like Subway, Sizzler, and Johnny Rockets are launching their own trucks, hoping to cash in on the caché. It’s pretty clear this Character Approved trend won’t run out of gas any time soon.