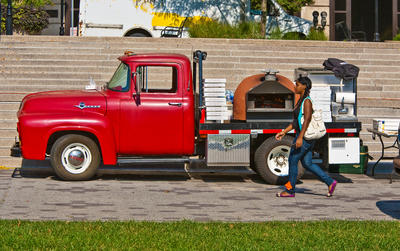 By ERICA COHEN and PATRICIA TALORICO
The News Journal

He isn’t there to shop. He’s there to feed the hungry.

Hans, who owns the Wood Fired Pizza Truck, bakes pizzas out of an oven attached to the back of his Ford.

The Delaware pie guy is a local competitor in the culinary world’s white-hot, food truck frenzy that’s speeding across the nation.

Forget pulling up a chair. Pull into a parking lot or curbside on a city street from San Francisco to Miami and chances are good you’ll find mobile food businesses operated by chefs serving everything from sweet and savory crepes to Vietnamese-inspired hoagies.

Gourmet meals on wheels have grown so popular, the Food Network unveiled a new show “The Great Food Truck Race,” which followed seven food truck teams on the road as they competed for a $50,000 prize.

Brian Lando, the Food Network’s vice president of programming, said mobile food businesses are in demand because, for chefs wanting to try out new concepts, they’re a cheaper option than opening a full-fledged restaurant.

“Food trucks are a way that chefs can showcase something delicious and inventive without the restraints of a brick-and-mortar restaurant,”  he said in an e-mail.

Vendingtrucks.com, a website that sells mobile kitchens, offers food trucks for anywhere from about $20,000 to $85,000.

Like restaurants, food trucks are inspected by health departments.

“The Great Food Truck Race,” hosted by Tyler Florence, has been such a success in its first season – the final episode aired last month – the Food Network has already received 300 entries from food truck operators who want to be on Season 2.

“I don’t think we know the immediate effect on the food truck market,” Lando said. “But I would guess that the show and its contestants’ stories have probably inspired other passionate food people to pursue the idea of starting a food truck.”

Franklin Shen, owner of the Sugar Philly truck, said while the Food Network may have some effect on the trend, he started his own truck in Philadelphia earlier this year because of fond memories of food trucks he frequented when he was a University of Pennsylvania student.

Shen didn’t want to compete against the food trucks he had come to love at the school he graduated from in 2003, so he decided offering dessert would be perfect; it set him apart from the other trucks on campus.

Sugar Philly, which he  parks at 38th and Sansom streets, has four to six main menu items – including such enticing treats as a spicy Mexican layered chocolate cake filled with spicy buttercream and pumpkin custard with candied pecans and “torched” marshmallow  – and always showcases its signature macaroons.

“They’re sweet and bring a smile to your face,” he said.

Shen thinks Philadelphia has as much potential as New York, Los Angeles and other food truck meccas.

“What we do know about Philly is they have great food,” he said. “Jose Garces is an ‘Iron Chef’ and Philly is becoming known as a food city.”

Garces, who has seven city ventures, has indeed gotten on board with the food truck concept. His own roaming truck, Guapos Tacos, featuring such eats as lengua (tongue) tacos, will roll out in late November or by early December.

The Kogi Korean BBQ-To-Go truck in Los Angeles helped fire up the mobile food trend when it began folding Korean barbecue into tortillas in 2008. The Kogi trucks – there are now four – travel to various sites and let more than 75,000 Twitter followers know where they will park next.

Hans, the Delaware pizza truck operator, also makes use of social media. He tells fans where he’s headed through Facebook and Twitter http://twitter.com/WoodFiredPizzaT) and shares his daily menu.
In recent weeks, pizzas have been topped with spicy sausage, pepperoni, and jalapenos, and vegetarian lovers could pick up squash and zucchini pies.

Hans, a chef for more than 10 years, said he decided to leave the restaurant business to spend more time with his children. A fellow pizza trucker and friend in Florida inspired him to get into the food truck business.

“I figured there would be a niche market to do farmers markets and smaller events,” said Hans, who can be found at birthday parties, festivals and, from 10 a.m. to 2 p.m. on Wednesdays, in Wilmington’s Rodney Square, where he was recently selling $2 slices. “It’s really picking up and we’re building a loyal customer base.”

The chef found his truck in Montana and then ordered his pizza oven from Italy.

At the Newark Farmers Market off East Main Street, where he parks on Sundays from 10 a.m. to 2 p.m., he tries to use all organic products, including fresh vegetables from the vendors around him.

Pizzas are sprinkled with cheese from the First State Creamery, a small Marydel goat farm that produces chevre and aged goat cheese. From other stands, he buys Roma tomatoes and walnuts that are grinded into homemade pesto.

Hans’ pie toppings range from the ordinary (mushrooms) to the unusual (potato). His biggest hit is a white pizza made with roasted garlic olive oil, spinach and ricotta.

The pies bake for about 90 seconds in an oven fed with hardwoods, which can exceed 800 degrees. He sells as many as 70 pies during an afternoon.

“Some of our customers will walk up and say ‘What’s the special today?’” Hans said.  “We’ve had really positive feedback.”

Rich Lopatin, one of the founders of Coup de Taco in Philadelphia, also is encouraged by reaction from customers who frequent the truck parked on 40th Street between Locust and Spruce streets.

Before he and his partners ponied up for the truck – it cost about $40,000 plus an additional $2,750 for a license and permit – they began cooking taco variations for friends.

“It started with a few of our friends trying out our recipes and it ended up with people banging down the door asking to try our food. We thought if people liked it enough we should try it out,” he said of the food truck business that’s going even better than they expected.

One of their most popular items now is a Sweet Thai Taco made with marinated chicken or seasoned seitan, apple slaw and a smoky peanut sauce.