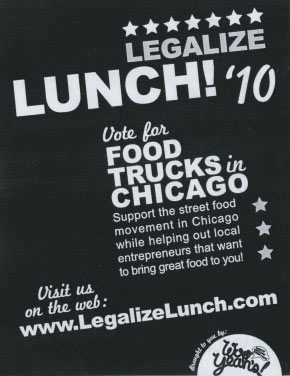 Filled with stories of Chicago entrepreneurs who want nothing more than the opportunity to earn an honest living, the report reveals how government regulations stand in their way, much like a recent article from the Wall Street Journal this week about food truck obstacles in Chicago:

Food trucks—essentially restaurants on wheels—have taken off in cities such as Los Angeles and New York, spurred by the weak economy, trendy fare and the proliferation of social media, like Twitter. Food & Wine magazine voted an L.A. food-truck chef one of its “Best New Chefs” of 2010 and the Food Network has a show devoted to such vendors. But in Chicago, one of the nation’s most progressive culinary cities, the trucks are held back by restrictive rules and operate in a legal twilight zone.

Unlike other cities, where chefs are free to actually cook inside their trucks, Chicago chefs can’t unwrap or alter the food in any way once it’s on a truck. And food trucks aren’t allowed to park within 200 feet of a restaurant. Such roadblocks have kept all but a few chefs from taking to the streets—even as the food trucks fight to change the rules.

Food trucks and other similar, entrepreneurial ventures like them should be embraced not pummeled with onerous, unnecessary regulations. As IJ contends, “Getting into business in Chicago shouldn’t require someone to kiss the alderman’s ring. The marketplace—and not the government—is best able to decide if a business will succeed.” For more examples of entrepreneurial roadblocks in Chicago and Illinois, check out the study.

Illinois’s economic health is in jeopardy. One avenue Illinois lawmakers must address in order to bring prosperity back to this state involves sweeping regulatory reform. Illinois needs to change course and say “Come on in!” not “Keep OUT.” to entrepreneurs and businesses who, frankly, most likely see much more welcoming, business-friendly environments in neighboring states.