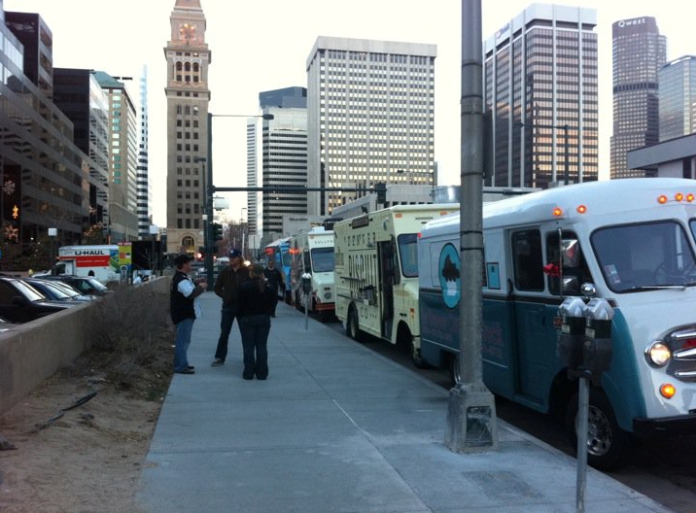 Cupcakes, pad thai, lobster rolls, truffle Mac ‘n cheese – what do these things have in common? All can be found on an assortment of Food Trucks operating in and around Denver.  These mobile eateries are growing in popularity and have attracted media attention over the past few months.

These aren’t the ice cream trucks of your childhood. Food Trucks have evolved and their operators are now using Twitter and Facebook to let their customers know where they will be headed next.  The Justice League of Street Food group allows the trucks to coordinate their arrival at pre-determined locations creating temporary mobile food courts at various locations throughout the city.
As the Food Truck scene has exploded in popularity across the country many U.S. cities are working through a number of similar issues regarding the trucks and their operation.  Discussions have included but are not limited to the following:
On January 26th Denver City Council’s Business, Workforce & Sustainability Committee met to discuss Food Trucks and clarify the rules for their operation in the City and County of Denver.  As a result, a task force chaired by Councilwoman Carla Madison was created to solicit feedback and suggest changes to the rules and regulations that govern Food Trucks.  Over the coming weeks Councilwoman Madison and the Downtown Denver Partnership will be reaching out to many stakeholders in the community to solicit their ideas and feedback.
“The Food Truck conversation will likely continue to center around Downtown Denver given its significant pedestrian population and the current rules that are in place for the Central Business District,” said Brian Phetteplace, the Partnership’s Manager of Residential and Retail Development. “We will continue to meet with a number of stakeholders to discuss the many facets of this issue so that we can come to an optimal resolution that hopefully works well for the Food Truck operators, current restaurant establishments, event managers and the Downtown community as a whole.”