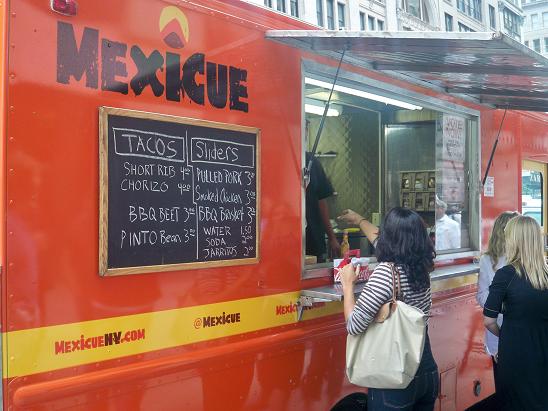 Steve Chiotakis: A lot of people regardless of income are also eating at food trucks, especially in big cities. But a new business model has those food truck owners opening sit-down restaurants.

Tracey Samuelson: For just under a year now, the popular food truck Mexicue has been serving up its blend of Mexican food and Southern BBQ all over New York City — from Midtown one day to Williamsburg, Brooklyn, the next.

Dave Schillace: I think the truck is the most phenomenal marketing tool in the world. We can put this thing in the middle of Midtown on 55th and Park or 45th and 6th and it could be very visible.

Dave Schillace is co-owner of Mexicue. He says his bright orange truck has been a great way to test menu ideas and locations. And at $50,000, it cost far less than a full restaurant.

But now Mexicue is one of a growing number of food trucks across the country opening a brick-and-mortar restaurant. So why put down roots?

Schillace: There’s something that’s always going wrong with the trucks. It’s a complicated beast, the truck, and I think restaurants are just a more practical way to expand.

You don’t have to worry about parking or weather, not to mention a cramped kitchen. David Weber is president of the New York City Food Truck Association. More than half of the group’s 27 truck owners are opening up restaurants.

David Weber: So I think that really speaks to the idea of the food truck as an incubator, as a gateway to be a more stable part of the New York City culinary community.

So while food trucks are often talked about as a new, disruptive business model, for most owners, they’re more like a cautious first step. Schnitzel & Things started as a truck in 2009 and recently opened a Midtown restaurant. Here’s owner Oleg Voss.

Oleg Voss: We moved into the restaurant because it was always part of the plan. I mean, we opened up the food truck with the intention of growing.

But that’s not to say that food trucks will fade away. Both Schnitzel & Things and Mexicue say they’ll never give up the truck — and the marketing power it packs.