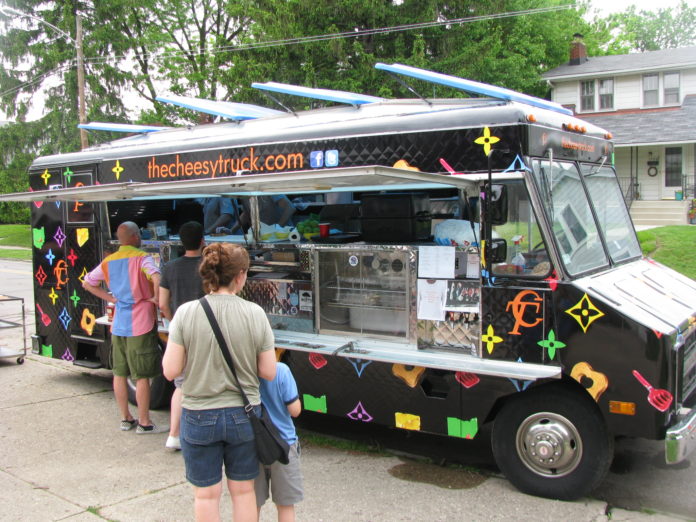 By Collin Binkley | THE COLUMBUS DISPATCH

And the $100 grilled cheese sandwich sold out of a van? The extra zero is supposed to be there.

Like diners in other big cities that have gained attention with outrageously priced dishes (a $5,000 truffle burger in Las Vegas and a $1,000 caviar pizza in New York, to name a couple), casual restaurants around town have added lavish and jaw-dropping options to their lineups.

The pizza at Anthony’s Pizzeria in Bexley that sells for $700 is topped with caviar, as is the $100 grilled cheese sandwich sold at the Cheesy Truck, a newly launched food truck that bounces between festivals and night-life hot spots when not parked on Wednesdays at the Columbus Commons park Downtown.

“I think this is the first time we’ve seen this in central Ohio,” said Jarrod Clabaugh, spokesman for the Ohio Restaurant Association, a trade group.

“Typically we see this in larger cities, like New York and Chicago.”

He views the idea mainly as a marketing ploy: A pizza for the price of a computer doesn’t inspire much demand, but it does attract attention.

The restaurants touting the extravagant dishes don’t deny the branding benefits derived from such eye-catching items.

Still, they remain optimistic about finding the perfect customers.

“We’re looking for that caviar lover who wants his own pizza,” said Jim Douglas, owner of Anthony’s.

He put the opulent pie on the menu three months ago after conceiving it in an equally luxurious venue: the caviar bar at the Bellagio hotel in Las Vegas.

He found himself wondering whether the expensive treat would go well with pizza.

“It tastes great,” he said. “I was pleasantly surprised.”

Unlike the New York shop, which began selling its $1,000 caviar-and-lobster pizza a few years ago and requires 24 hours’ notice, Douglas is prepared to make his pizza at the drop of a dime.

“We have enough for a couple of pizzas,” he said, “and I don’t think anybody’s going to come in to order more than two in a day.”

Even though he hasn’t yet sold one, Douglas has placed a sidewalk sign outside the shop that trumpets the pizza in bold, oversize type.

The sign betrays a gimmicky spirit that suits the dish – a spirit that other restaurants have adopted with outlandish meals.

At the Cheesy Truck, owner Rick Wolfe isn’t surprised to see folks snap a cellphone picture of his menu – with its caviar sandwich – while he slings ingredients.

“Between having a $3 sandwich and (promoting) a $100 item, I thought it was something fun,” said Wolfe, who began operating the grilled-cheese truck last month.

The sandwich, dubbed the “Jackie O,” boasts creme fraiche, capers and an ounce of osetra caviar. For the $100 tab, a customer also gets a mother-of-pearl spoon and a plaque on the truck.

The space reserved for the honor is bare, of course.

Wolfe could only speculate where the first caviar-craving patron might appear.

“It could be parked at a bar out on Park Street where a guy wants to be a big player in front of his girlfriend,” said the recent returnee to his hometown of Grandview Heights after a stint in the Los Angeles corporate world.

In the 1940s, the Blue Danube restaurant in the University District – then a fine-dining establishment – served caviar.

Despite the $165 cost, servers pop open a bottle of the bubbly about once a month – usually for special occasions.

Without such a stream of customers, Clabaugh said, the new deals will probably burn out, especially in the midst of a difficult economic climate.

Yet his pizza, Douglas said, is meant for a clientele that doesn’t feel the strain of a downturn.

Given his confidence that he’ll find a buyer, he even plans to raise the price.