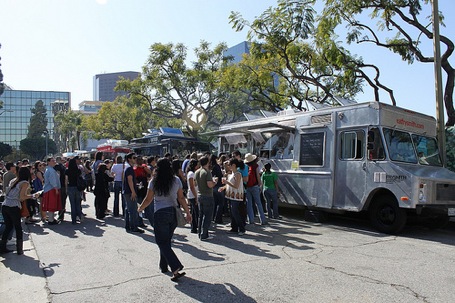 As the food truck trend grows, corporate chains like Jack in the Box are paying attention.

It was only a matter of time.

There was no way we could keep guerrilla marketing techniques and word of mouth culinary tips to ourselves. No, after several years of brief stints in the limelight, the food cart world was destined for mainstream. And last week, Jack in the Box was the latest chain restaurant to jump on the bandwagon.

Jack in the Box’s new “Munchie Mobile,” which is hitting the streets of Southern California, is certainly making food cart lovers across the nation cringe. The simple beauty of a unique food truck serving up dishes you would only ever hear of via word of mouth or Twitter is completely lost on the chain. Well, except that the Munchie Mobile does have a Twitter feed.

A food cart traditionally provides the opportunity to seek out a new business venture, to take a stab at crafting one’s own recipes, and to make a name for oneself in an unpretentious, efficient manner. For big brands, it’s simply the latest marketing tool.

Last fall, in order to promote its new Dip & Squeeze Ketchup, Heinz outfitted a truck to become a veritable moving billboard, starting in Philadelphia and making stops along the way to share french fries and ketchup with the masses. Of course there was an entire coordinated social media campaign along with all this, with prizes given away for Foursquare check-ins and tagged Twitter updates.

Five years ago, such an initiative may have seem a little over the top, or out of place, but in the age of food carts, the Heinz truck fits right in. In larger cities these days it’s practically second nature to walk up to a truck window and place an order.

One could argue that the true original franchised “food truck” was the Oscar Meyer weinermobile – which is still traveling around and keeping up its own blog written by the “hotdoggers” who drive it. But the difference here is between an over-the-top marketing gimmick (a vehicle shaped like a hotdog) and the incorporation of guerrilla street tactics to make marketing efforts seem more genuine (franchise in a truck). Efforts like this aren’t just happening on the street. Take Starbucks, which is putting a large effort behind making some of their thousands of worldwide coffee shops appear more like local institutions that the global multinational brand that they are.

Why do initiatives like this feel inherently dirty? Because larger interests are encroaching on the success that has been created by independent business seeking to do something different, veering from the norm and surprising customers.

Just a few years ago, food carts were nothing more than obscure. You wouldn’t find lines around the block or well-known chefs hitting them up for lunch. But nowadays they’ve come to define an important part of American food culture; one that’s important precisely because it isn’t based on marketing to the masses.

And that means money. Whereas many independent food trucks and food carts started small, creating their business as they grew, now there’s a market for getting everything in place from the get-go. There’s even a company called Mobi Munch that is “the nation’s first mobile food service infrastructure company and online marketing channel dedicated to providing established chefs and restaurateurs an integrated online and offline platform for launching innovative restaurant concepts aboard state-of-the-art food trucks.”

Mobi Munch helps franchises get food trucks going. And as the food truck industry continues to grow, business for them is booming. “Six months ago I projected that 10 percent of the top 200 restaurant chains would have some mobile presence,” Aaron Noveshen, founder of Mobi Munch said. “Now I think that number will be higher.”

As conscious lunchtime consumers, maybe we should feel honored that we’ve had a part in driving a movement that’s become so popular it’s now being co-opted by fast food. Then again, maybe not.