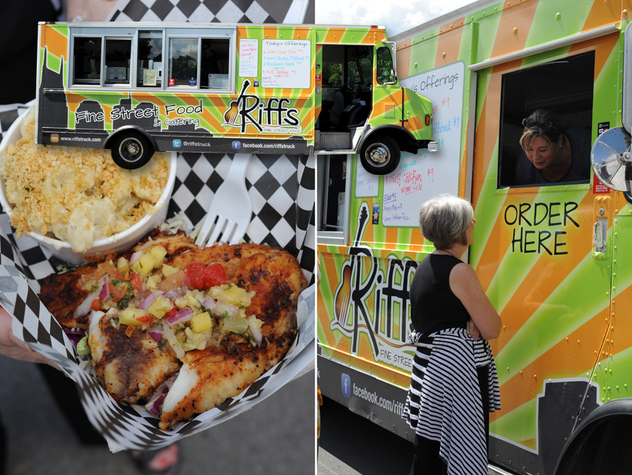 By Jennifer Justus | The Tennessean

Just a few years ago, the food trucks in town seemed mostly limited to the parking lots along Nolensville Road, where carts serving bundles of barbacoa and carnitas in tortillas with lime wedges draw power from the buildings where they are permanently parked.

But within the past few years, a more modern group of mobile trucks has taken to the streets. They’ve grown in number and organized with the Nashville Food Truck Association. And on Saturday, the group hosts the first Nashville Street Food Awards with tastings for both a panel of judges and the public.

The event is the brainchild of B.J. Lofback of Riffs Fine Street Food Truck. Basing it on the British Street Food Awards, he added a familiar concept from the competition barbecue circuit with nearly 30 trucks having set “turn-in” times for dishes in categories that include Best Burger, Best Taco, Best Vegetarian and Best Hot Nashville.

“People love these competitions,” he said. “We really wanted to showcase the talent of these trucks. We wanted to take what they’re already doing and stretch it. Nashville has some amazing street food, and we wanted to show that off and help people know what’s happening in Nashville.”

So in celebration of the event, our local food truck vendors pose questions — with a couple from us — to John T. Edge, who came through town earlier this year with his new book “The Truck Food Cookbook.” The book includes insight on food truck culture, stories behind trucks across the country and recipes (an example of which is crawfish pies).

What is your favorite dish — or a dish that stands out to you — from your experiences at food trucks? —
Jon Heidelberg from Jonbalaya

I just came back from the San Francisco Street Food Festival. There were 50,000-plus people streaming through the Mission. This is an event by La Cocina, a small business incubator in the Mission. At Hawker Fare, they were serving food from Southeast Asia, and they served three things: an “Issan” sausage from Thailand, peanuts with anchovies and a salted lemonade.

They telegraphed their place. They referenced the style of eating there — the hawker stalls that are a part of Singapore. They restricted themselves to three things.

The peanuts — in their gooey, great sauce studded with anchovies — they scooped and served in a boat and you were gone. It was efficient. The lemonade is something you recognize but different. There was an entry point.

The message was good. The tightness of menu was good and efficiency of delivery worked, and the food was fantastic.

You can build an entire business around that. For those of us that grew up in the South, you trust a barbecue restaurant, because they serve you some barbecue and maybe some beans. There’s some trust. … I don’t want you doing tilapia fillets. This idea that you’re a specialist. I trust the specialist.

What qualities do you appreciate in a food truck other than tasty food? —
Elizabeth Nunnally, Retro Sno

Who would you want to be a guest chef in a truck you eat from? —
Carlos Davis of Riffs Fine Street Food

None of them. I’m critical of the “vendrification“ (both the gentrification of traditional catering and taco trucks and the consumer’s ongoing fascination) of street food. The whole idea is these are small business people trying to make a go. I understand the chef as wanting to do this as a lark. But the chef that goes slumming — that uses it as brand extension — perverts the model a bit.

You need a two-sentence pitch for your business that you can articulate and that others can understand. Until you have that, then you shouldn’t sling open your order window.

What one thing do you see successful food trucks do that trucks that fail don’t do? —
Karl Worley of Biscuit Love Truck

I think the successful trucks have a very tight focus. Their message and menu are well-crafted and succinct. I think especially with the small footprint of carts and trailers, the tighter the menu the better. You can’t be everything to everyone.

Are there common themes in cities that embrace food trucks?

There are two kinds of cities. There are aspirational cities who want to improve street life in their city and recognize that to have a vital street life leads to safer streets and more commerce, especially in downtown areas. There’s this aspirational city that realizes that a street food scene is vital to street life.

The other is the kind like Portland, Austin. The sort of city that has a vital street food scene that in the history of the modern era of street food is mature. It’s a mundane part of everyday life — no less beloved because it’s mundane, but it’s an accepted part even though there may be debates about legislation.

If you were to go before a board of city officials to make a case for food trucks in a city and their benefit to food culture, what would you say?

I think that trucks, carts, trailers, whatever conveyance we’re talking about — these are at their core small business people who have honed a recipe, fashioned a business plan and are working to build a sustainable business that feeds their family. The notion that their business just happens to have wheels on it is irrelevant. These are small businesses trying to work their plan. If the term micro loans has become popular of late. … These are micro businesses that have the potential to grow and contribute to the tax base of Nashville and Davidson County.

In your travels, have you seen more people struggling in this business or succeeding? —
Shane Autrey of Smoke Et Al

Again I come back to this being like any other restaurant business. There are people who are succeeding and people who are struggling. Has it peaked or will it continue to spike? I think it has not spiked. I think there are cities where street food is not an everyday indulgence, where it is a special occasional food, and until street food becomes an everyday food in medium and large-sized cities across the country, there’s growth and potential for a range of businesses.

Have you discovered anything about the Nashville food truck scene that is unique to our city? —
Elizabeth Nunnally of Retro Sno

There’s a third wave of truck food in the United States, and Nashville is in the vanguard of the third wave. It’s not to say that Nashville lags. What I see encouraging about Nashville are people like Biscuit Love, who are interpreting local food. Like the East Nasty and the idea of referencing the Bolton’s and Prince’s and with a tip of the hat to Robert Stehling in Charleston at Hominy Grill, who has a “big nasty biscuit” on the menu for 10 years at least. That kind of menu writing and creativity speaks well to the future of truck food in Nashville. There’s a kind of pan-American menu that you see replicated all over the country. … It’s Korean tacos, red velvet cake cupcakes. Nashville is developing its own personality. Nashville has had a chance to observe and absorb and learn the circuit down Nolensville Road and apply what they’ve learned.