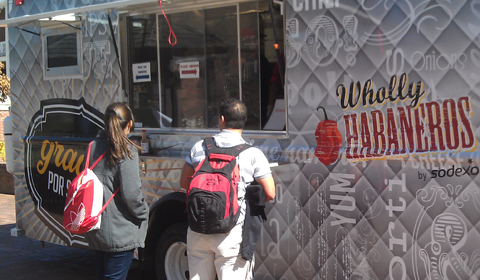 By Charlotte Rodina |  The Bullet

After a three-day test run last November, the grey and red Wholly Habañero food truck rolled down Campus Walk and parked near Trinkle last Monday, March 11. The truck will return to the same spot every Monday through Friday from 11:30 a.m. until 2 p.m. to serve up Mexican food that’s “Qdoba-level quality,” according to junior psychology major Erika Persil.

University of Mary Washington chef Bob Beaudry said his favorite menu item is the taco salad, which includes either pork, chicken or beef in a crispy shell with sides such as lettuce, guacamole, cheese, salsa, sour cream and tomatoes. The menu also features burritos, soft tacos and salad bowls. Chips and salsa are a popular side dish, according to Beaudry.

“You can definitely get a hearty meal here,” said Beaudry.

The food truck, part of UMW dining services, has a full kitchen inside, but the grills are not yet active.

“We prepare the ingredients at Seacobeck and then items are made to order on the truck for each student,” according to Kori Dean, general manager of Eagle Dining.

Students are already showing interest in the truck.  Many have braved the cold March wind to stand outside and order lunch, despite the heated, indoor-dining options on campus.

One student said she liked Wholly Habañero because of the convenience factor, in addition to the quality.

“I’m able to stop by in between classes,” said freshman international relations major Jenna Aschenback, who lives in Jefferson Hall, which is just a short walk away.

Though the food truck frenzy seemed to have bypassed Fredericksburg, vendors have taken over bigger cities like Washington, D.C. Tracking websites such as foodtruckfiesta.com, as well as social media websites, such as Twitter and Facebook, show food truck locations in real time in the city so customers can find their favorite foods, which move around from day to day.

There are about 100 food trucks on any given day in the District, according to the Washingtonian. The trucks, which are boxy and often brightly colored, serve savory or sweet snacks that are as creative as the colorful mobile.

Though Wholly Habañero does not concoct crazy combinations, the truck does stand out, with the bright red letters of the name and “gracias por su visita” written on the side, as well as on the menu.

“I like the flash of it,” said junior and math major Marco Levine after placing his first order.

Even though a tracking application is not necessary for the time being, Wholly Habañero might start showing up at school events, beginning this summer, to sell to crowds, according to Eagle Dining employee Richard Gustard.

“It’s a trend right now,” said Gustard, “and UMW is picking up on that.”