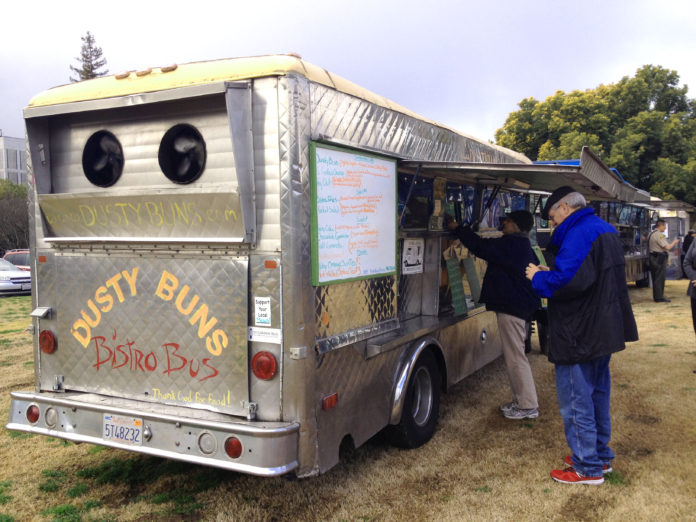 By Clay Moffitt | The Business Journal

The Downtown Fresno Partnership and Creative Fresno have proposed two concepts for downtown restaurants to get in on the CartHop food truck event buzz, but crucial details still need to be hammered out before implementation.

The two proposals were presented last Monday at the Downtown Fresno Partnership’s monthly meeting with downtown restaurants. The ideas came in response to concerns recently raised by the restaurant owners about the weekly CartHop event along Fulton Mall cutting into their Thursday sales.

“The restaurant owners attending the meeting didn’t have a distaste for CartHop, they were just concerned how it affected their businesses,” said Jake Soberal, board member for Creative Fresno, which organizes CartHop.

The first of the two proposed solutions is to have the partnership set up a booth on the Fulton Mall during CartHop with marketing material and menus for the downtown restaurants.

The second proposal was to set up another booth with food service equipment that the downtown restaurants would take turns using every Thursday during CartHop.

Both the solutions will take some time to implement, but according to Kate Borders, president of the Downtown Fresno Partnership, the marketing booth is much closer on the horizon.

“Maybe not this Thursday, but we will definitely set up a mobile marketing booth and more than likely we will do the mobile food booth, but we’re still collecting more information,” Borders said.

The largest of the many details needing to be determined regarding the mobile food booth is deciding who will foot the bill for the equipment.

Mike Smith, the owner of Kocky’s Bar & Grill, said his understanding was the Downtown Fresno Partnership would purchase the equipment. However, he wasn’t sure how the organization would go about acquiring the funds.

“Will I have to pitch in or they’re just going to do it? As long as I have the opportunity to sell food and advertise my food, it is fine with me,” Smith said.

Borders views the concept still in its infancy and is unsure how the booth will be paid for and operated.

“We don’t know the cost of the equipment or what it would take to get started, and we don’t know how many restaurants are interested,” Borders said. “We still have to have a lot research.”

Practical matters such as where the equipment will be stored during the rest of the week still have yet to be resolved.

Another key component still yet to be determined is whether downtown businesses would have to pay a fee to have a place in the booth.

The owners of the mobile trucks themselves were not invited to participate in the meeting on Monday.

James P. Caples, owner of the food truck Benaddiction, LLC, said although he does not like the idea of meetings being held regarding his industry without a mobile food vendor in attendance, he 100-percent supported both of the concepts.

“I actually don’t like those referred to as changes,” Caples said. “At any point, if any of these owners wanted to come out and set up a table or a booth, each of the mobile vendors would have said, ‘Thank you, you’re welcome to join us.’”

For Caples, the bigger issue is the absence of any local representation of the mobile food vendor industry.

He appreciates the efforts of Creative Fresno to organize events such as CartHop, but he feels there needs to be a trade group consisting of actual mobile food vendor owners.

“That lack of representation is not anyone’s fault but our own because we have not been quick enough in creating our own organization,” Caples said.

The downtown business owners are not the first to raise concerns regarding mobile food trucks.

In 2011, the Fresno City Council proposed an ordinance that would limit the vendors to be parked at one location for one hour on city streets. After that time period, they would have been required to move at least 500 feet and not return to that location for a minimum of 12 hours.

However in October of that year, the council elected to postpone making a decision on the ordinance and nothing has been voted on to date.