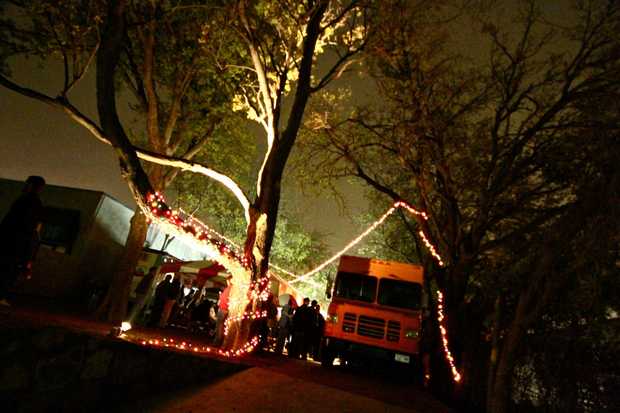 The opening night of the Fort Worth Food Park was a little murky — literally.

First, a thick blanket of fog covered Cowtown, giving the entire evening a surreal, London calling-type aura. And the location of the park, tucked between non-descript warehouses behind the Seventh Street Target, made you feel as if you were heading into an alley to meet a guy about a thing. Maybe he’d sell you some cut-rate handbags or leather jackets off the back of his truck. Maybe he’d stiff you entirely and leave you waiting in the mist.

But the reality wasn’t nearly that shady or cinematic.

The Fort Worth Food Park, once we found it, was kinda cool and definitely “intimate.” Six trucks — three on each side – bracketed long rows of picnic tables with tents. On the far end of the park, a bit of live music gave the entire affair an indie Austin vibe. A couple hundred foodies arrived early to get a first taste, and they didn’t seem to mind the wait. Organizers controlled the flow of patrons so the lines wouldn’t get out of hand, and that seemed like a smart move.

A couple of the trucks inside were familiar: Yes! Taco has been building a fanbase in the SiNaCa Studios School of Glass parking lot on Magnolia Avenue, and Jakes Patty Wagon, well, we’ve eaten our fair shair of Jakes over the years. It was a finalist in the 2009 Battle of Burgers. But Lee’s Grilled Cheese seemed to be the hottest dish, at least judging by the lines. (Could have been because it was closest to the free Rahr beer stand, too.) But with estimates that it was taking 20 minutes to get a chance to order, and another 20 to taste the gooey goodness, I decided to try it another day. (No offense, but I could have gone to the nearby In N Out and back several times in 40 minutes.)

I heard some good reviews from patrons about Good Karma Kitchen’s vegetarian chili, especially on this chilly night. But once I scanned the menu board and saw the words “Kale Puree,” this carnivore kept moving.

Nammi has earned raves here and in Dallas, and the Vietnamese food truck’s menu is the most eclectic. Try the Bahn Mi; you’ll thank me.

For dessert, Red Jet Sweets hit the sweet spot. We’re fans of the Peter Pumpkin cupcake, but they’re all good — even if the $3 per cc price tag makes me wanna run to Albertson’s and buy a dozen for $2.99 just to say I can.

Will the food truck park become a regular stop on the Fort Worth foodie tour? Truth is, the weather on opening weekend made it hard to tell. Judging from the energy on Friday, there is potential. But the truck lineup will have to stay fresh, and the owners will have to continue to plan parties and events to draw people to the hidden location. That shouldn’t be a problem. Our friends at DFWfoodtruck Foodie report that seven new trucks will hit this area during the holidays.

And if I needed any more confirmation of Fort Worth’s current obsession with food trucks, I got it when I left the park around 10 p.m. and went a few blocks to Lola’s Sixth to see a friend’s band. When I came out, there was the Crazy Sisters truck waiting to serve up some midnight tacos for the road.