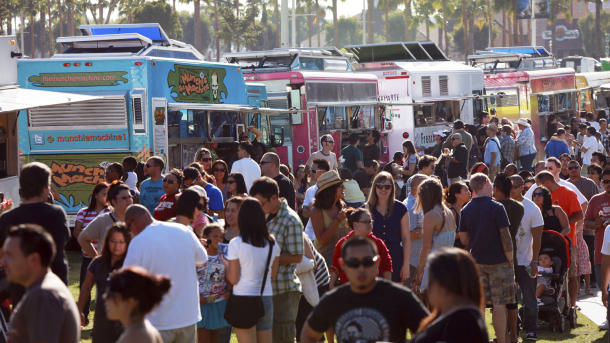 By May Jeong & Katherine Scarrow | The Globe & Mail

Pop-up restaurants have been popular in cities like Los Angeles for years, but this culinary trend has been slow to catch on in Canada, where complicated bylaws prohibit commercial food vendors from selling their grub. Toronto has been long known for its impressive spread of cheap ethnic food, but few restaurants have successfully implemented the guerrilla pop-up concept popular elsewhere.

OneMethod Digital & Design Inc. is the mastermind behind La Carnita Ltd. For $10, customers receive a limited edition piece of art by a local artist and three tacos concocted by the company’s epicurean design director, Andrew Richmond.

Art with a side of tacos

To deal with the legal restrictions around operating a food truck in Toronto, La Carnita dreamed up a solution: sell art work, not tacos. “You pay for the art, and hey, we just happen to give you a loot bag filled with tacos,” says OneMethod president and CEO Amin Todai.

Local artists volunteer their time and talent to create a piece of art based on La Carnita’s ‘meat head’ logo. OneMethod plans to eventually host an exhibit featuring the various original works of art.

OneMethod doesn’t promote the La Carnita truck through traditional advertising channels. Instead, the company announces the truck’s whereabouts on Twitter a few hours ahead of the event. It’s the foodie fanboys who spread the word online. Others find out through word of mouth.

The concept has obviously intrigued in-the-know Torontonians craving a new culinary experience. On its first day of business, OneMethod sold 150 works of art in 20 minutes, according to Mr. Todai. The second time, they sold more than 200.

Douchan Joskic, who works at the the Ontario Ministry of Environment, waited a full hour in line to get his hands on an original piece of artwork and three homemade tacos. “Last time, I came within 10 minutes of the Tweet, and I was the 160th but they were only serving 150 and I had to watch other people enjoy the tacos,” he said.

Restaurant in the works

Mr. Todai and Mr. Richmond have plans to open a full-scale La Carnita restaurant, but thought the truck would serve as a good dry run to gauge consumer interest. The question facing them is whether a permanent restaurant would draw the same crowds, or hold the same cachet, as the ephemeral pop-up. “We wanted to integrate street food with street art,” said Mr. Richmond.

As art-appreciating taco fiends walk off with their bag containing the delicious medley of onion, peppers cilantro, freshly baked tortillas and Yucatan pulled pork, braised beef short ribs and Pacific cod, they may be hoping that La Carnita will continue to ‘show up’ across the city. And they may also be hoping that this ingenious pop-up trend continue to spread across Canada.