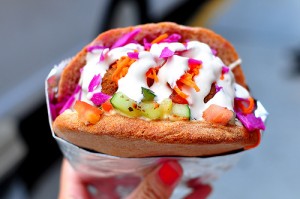 In the old days for a couple bucks, all a hungry soul could get  from a street lunch truck was a stale hot dog, a salty pretzel or a  warm soda. Today however, a new generation of lunch trucks is coming your way. They serve high-end fare such as grass-fed beef hamburgers, escargot and creme brulee. As they rove the streets of cities like Austin, New York, San Francisco and Los Angeles, they alert customers to their locations using Twitter and Facebook. Their owners include highly trained chefs and well-known restauranteurs. Here are 10 of the best gourmet lunch trucks that may one day hit the streets of your city:

Profile: Co-owner Jeff Blank is the chef and owner of Austin’s well-known Hudson’s on the Bend. The stationary truck serves the restaurant’s famous crunchy coating on fried chicken, shrimp or avocado.

Speciality: Deep-fried avocado—coated with almonds, sesame seeds, cornflakes and chili, wrapped in a tortilla and topped with mango-jalapeno slaw.

Finding It: The Web site, http://mightycone.com, lists the menu, hours and location.

Finding It: A schedule of stops is posted on the Web site, www.roliroti.com.

Spencer on the Go

Finding It: Information is posted at
www.spenceronthego.com and via Twitter (@chezspencergo).

Finding It: The Web site, www.desserttruck.com, lists the usual schedule; there are  also occasional Twitter updates via @desserttruck.

Finding It: The Web site, calexicocart.com, posts a full menu; messages about specials and locations are sent regularly via Twitter (@calexicocart).

Profile: Kogi BBQ shot to national fame this fall when word spread of its inventive cuisine—Korean meats in Mexican tacos and burritos—and use of Twitter (it now has 28,000 followers).

Finding It: The two trucks are easy to find via frequent updates on Twitter (@kogibbq.com) or through the Web site, www.kogibbq.com.

Profile: Ingredients are either local, organic, sustainably raised (such as line-caught small tuna) or vegan, and the two trucks run on recycled vegetable oil.

Finding It: Updates sent about once a day via Twitter (@green_truck) and posted at www.greentruckonthego.com alert diners to the three trucks’ whereabouts.

Finding It: Contact information is on the Web site, skilletstreetfood.com.

Profile: Stationary carts are parked primarily in tourist destinations around the Washington area. The company promotes its eco-friendly approach, from electric-cart technology to biodegradable packaging and organic ingredients.

Finding It: Locations are posted on their Web site, www.dconthefly.com.

Profile: From a truck fueled by fryer grease, Clover sells only vegetarian items.

Winnipeg, CAN: A Look Back at Downtown’s ManyFest