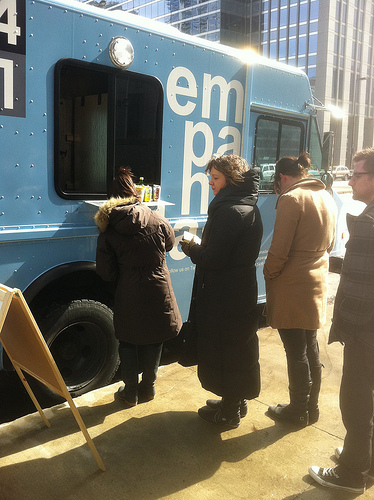 (CHICAGO) (WLS) — While Chicago’s City Council debates whether or not to allow mobile trucks to prepare food on them, a number of entrepreneurs are moving ahead, by cooking in licensed kitchens, then loading up trucks and selling to office workers during the day.

The next generation of mobile food vendors seems to be focusing on just one item at a time.

They move stealthily through the city — sometimes with less than an hour’s notice. The trucks prepare food at their commercially-licensed sites, then loading up, tweeting and letting everyone know their whereabouts. At The Southern, in Wicker Park, they created a truck that would deliver just one thing: mac and cheese.

“It’s kind of difficult for people to get to our Wicker Park location for lunch, so we wanted to bring it to everybody else. We knew we were making some good mac and cheese at the restaurant, and we figured it would be a good thing to hit the road with,” said Cary Taylor, the chef of The Southern.

White cheddar envelops apples and pecans; there’s also smoked gouda and a decadent blue cheese with bacon and mushrooms. The portions are huge and could easily feed two or three. Taylor says having a tagline helps.

“You have such a short interaction and amount of time to work with the guest, to be able to explain your concept to everybody that comes up, whereas if you’re the Mac & Cheese Truck, it’s like, oh man, that’s what we’re doin’,” said Taylor.

For dessert, Sweet Ride has the tiniest of trucks on the street. Cake pops are cute, but it’s the whoopie pies and mini-cupcakes that have led to more than 1,400 followers on Twitter. On one recent day, along Taylor Street, plenty of students seemed eager for a sugar rush.

And then there’s the empanada truck. 54-11 Empanadas (that’s the international calling code for Buenos Aires) makes its tiny, savory-filled packages of baked dough at Kitchen Chicago on the West Side every day.

“Every empanada has its own shape, and every single empanada is handmade so it’s a lot of work and heart and soul into it,” said Nicolas Ibarzabal, owner of the 5411 Empanada truck.

From beef to corn to ham and cheese, the beauties cost just two bucks. A small investment and a quick, delicious snack.

“This is all we do, we do empanadas; we want to do the best empanadas in town, and we’re not gonna go any further in the menu,” said Ibarzabal.

The empanada truck tweets its location five days a week, but they’ll also deliver directly to you – minimum order: 24 empanadas, and for a Loop worker, it’s hard to beat something that convenient and compact for a quick lunch.

Other single-subject food trucks are selling cupcakes and meatball sandwiches. They announce their daily location on Twitter and Facebook only.