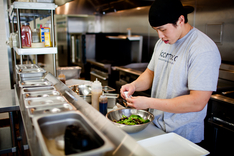 The food-truck trend exploded onto the quick-serve scene in 2009 and 2010, inspiring hundreds of wannabe operators to put their own set of wheels on the road. But with some believing the trend may already be dying—and with streets becoming more saturated with mobile food—many food-truck operators are planting firmer roots by opening traditional locations of their concepts.

Erwin Tjahyadi, the executive chef of Los Angeles–based Komodo, says the decision to add a storefront location complementing his company’s successful three-truck fleet was based on the need for more prep space.

In fact, the five partners behind Komodo were so enamored with the large, modern kitchen at their storefront that they didn’t think twice about being a non-kosher restaurant located in a kosher, Jewish neighborhood.

The brick-and-mortar Komodo opened in March in Monterey Park, California.

Sean Priester, owner and executive chef of Honolulu, Hawaii–based restaurant Soul, says he intended to expand his Soul Patrol truck business when an opportunity to move the truck’s concept into a brick-and-mortar location presented itself.

“These offers usually don’t develop into anything, but when I came to check out the location, it just felt right,” he says. “It was close to a busy neighborhood and a university, and the size felt very manageable for my first location.”

Priester put his food-truck growth on hiatus for a year after opening the restaurant, and then relaunched the truck in a permanent, rented location in downtown Honolulu.

“I can share the cost of having a truck with the restaurant,” he says, “and the restaurant helps support my model and provides another profit center and revenue stream.”

Dennis Lombardi, executive vice president of foodservice strategies at Columbus, Ohio–based consultancy WD Partners, says food-truck operators that want to open a brick-and-mortar unit should maintain the same brand feel that they run out of their truck.

“The obvious strategy to employ is to take your signature item—whatever your food truck sells—and make it the pull of the restaurant’s menu,” Lombardi says.

Still, while the food-truck trend is more developed in certain cities across the country, like Los Angeles, and could seem like it’s oversaturated some markets, Lombardi says there is still growth potential in mobile food.

“For $125,000 you can get into one of these trucks,” he says. “That means much less capital and no lease commitment. It’s a way to put a leg in the water without diving off the 10-meter board.”