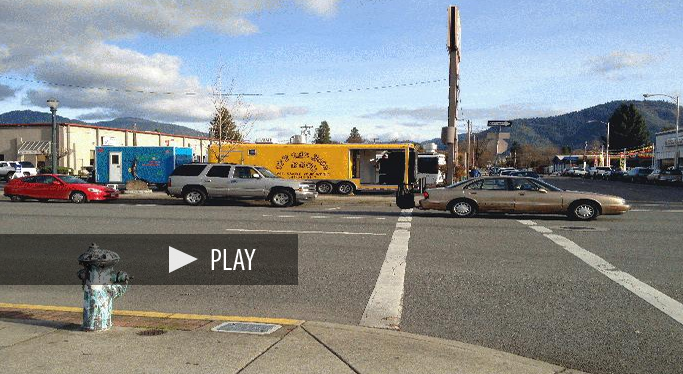 In the last six months, there has been an increase in mobile food vendors.

City staff claims the current standards are not enough for adequate regulation of the rising number of vendors.

Carla Angeli Paladino, Grants Pass Principal Planner, says the city “had an old peddlers ordinance that basically allows people to vend from the street.  It was outdated and […] [they] interpretted it to mean that people could vend from the street, but it just wasn’t working, so [they] came up with something new.”

It has been in the works for months and goes into effect Jan. 1.

The second Ordinance amends Ordinance 5563 and establishes on-and-off-public-street locations for the sale of ready-to-eat food from mobile vending cars.

The zoning goes into effect Jan. 4.

Paladino says during Wednesday’s City Council meeting, advocates of the zoning Ordinance “were recommending some on-street zones for food trucks and four streets were identified and approved.”

Part of the Growers Market parking lot will be used Monday through Friday for food vendors.

Overall, Paladino says the city wants to make sure regulations are up to date without hurting businesses. “We wanted to make sure that it worked for the vendors that wanted to be here and not hurt the brick and mortar.”

The vending zones only allow trucks.

Vendors selling on private properties will not be affected by the zoning.