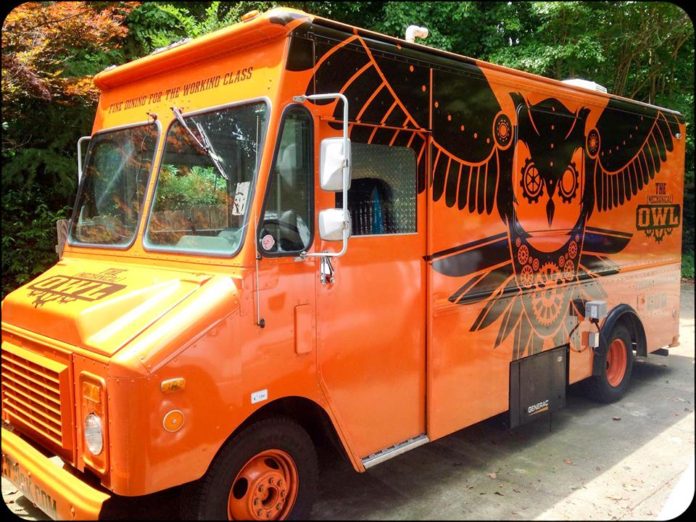 By Lillia Callum-Penso  | The Greenville Online 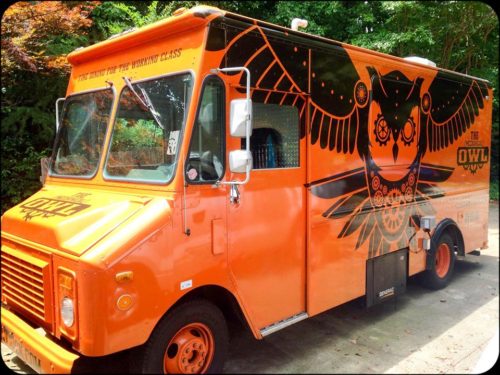 Joseph McCarter and Aaron Manter get really excited about vegetables. No, the former chefs at The Owl restaurant have not gone vegetarian, but they see preparing vegetables for the general public as a sort of challenge.

“My personal feeling is I like to cook vegetables because I like seeing people go ‘oh man, that’s super delicious,’” McCarter says. “Because it’s a little harder to get there. It’s challenging, in a way, and I really enjoy that.”

Vegetables are but one of the challenges the two plan to take on with their new food truck, The Mechanical Owl. The truck is inspired by the former brick-and-mortar restaurant, The Owl, but with its own distinct persona and style, say Manter and McCarter.

Vegetables are just the beginning.

The Mechanical Owl is slated to make its debut on Greenville’s streets the first week of August, but in the meantime, the creators of the truck are hard at work developing flavors and interesting pairings.

Manter, former Owl executive chef, and McCarter, former Owl chef de cuisine, are approaching the food truck with a similar mentality to their approach to the brick-and-mortar restaurant.

“It still has the same basic mission statement which is on the truck — ‘fine dining for the working class,’” Manter says. “With The Owl, we’ve joked you could be in a business suit or a bathing suit and we’ll serve you and you’re fine. It’s really come as you are. That’s how it was at The Owl and we’re carrying that with the truck.”

Since The Owl closed its doors in October 2013, Manter and McCarter have been planning a comeback. Manter first considered opening another location in The Village of West Greenville, but, Manter says, it didn’t work out.

At the same time, the duo behind Neue Southern food truck, Lauren Zandarnelli and Graham Foster, announced they were leaving Greenville.

“I said, what are you doing with the truck?” Manter recalls.

So the Mechanical Owl is the old Neue Southern truck.

In the meantime, though, Manter had gotten a job as a consultant at Genevieve’s at the Peace Center. That position recently turned into a full-time gig, so McCarter will be in charge of the Mechanical Owl’s day-to-day operations and Manter will act in a supporting role.

The two complement each other. Manter has no formal culinary training and brings more of a conceptual approach to food, whereas McCarter, with a degree from Johnson & Wales, has a more “flavor-forward” approach.

Most days the menu will feature five to eight dishes, including one or two dessert items, almost all of which will be original to the truck.

The truck will have a more pronounced vegetarian selection. Manter and McCarter predict that 50 percent of the menu will center on vegetables. That translates to dishes like a roasted eggplant pita with green pea hummus, Israeli salad, harissa yogurt and crispy potato or tandoori cauliflower (a holdover from The Owl) with cucumber raita, peanuts, sriracha and cilantro.

Like The Owl, The Mechanical Owl will also give thought to beverages. McCarter and Manter have planned their menu carefully to complement beer and wine served at the breweries and other locations where they will park. The two have worked with the likes of Quest, Brewery 85 and The Community Tap to develop dishes that can be enjoyed alongside local brews.

McCarter and Manter also have plans to develop a dessert menu that will also play off the beverage pairing idea. The two envision a play on the classic shandy, a drink generally made with beer, lemonade and a variety of other mix-ins. Think a popsicle that is designed to complement a specific beer.

“We’re trying to elevate Greenville,” Manter says. “Not that anyone else is doing it bad; we’re just trying to bring it up.”