By Melissa Buote  |  The Coast 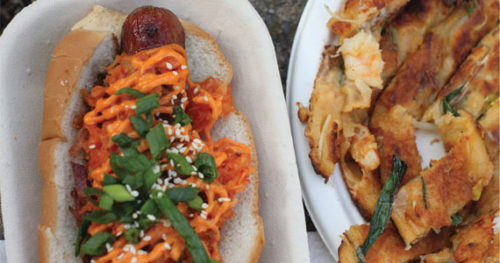 I see the little clapboard sign for the Food Wolf on the sidewalk before I see the truck itself, tucked away slightly off of Gottingen Street, across from the Marquee Club on the corner of Falkland, in the gravel lot they call Squiggle Park.

Allison and I meet there shortly after the truck arrives for their 5:30 supper run. It’s quiet in the neighbourhood, and nobody else is queuing up at the window yet.

The Food Wolf is still new, but at the same time it feels like a granddaddy of the modern street food scene. It has helped to usher in a new era of food trucks that sees them serve more than fish and chips and keeps them from being relegated to Burnside.

“We set out to spark a street food culture by opening a backyard restaurant,” says Natalie Chavarie, referring to Young & Dublin, the open-air supper club that ran the year before Food Wolf started prowling the streets. “Overall, we’ve witnessed increased excitement and support for food trucks in Halifax. We’re proud to be the leaders of the pack for a more vibrant local mobile street food movement.”

Virgil Muir and Eric Gunnells make up the other two thirds of that wolf pack. Their work in the visual arts plays a part in the food concepts. “The basic drive is to use local ingredients and meats to create unusual and unexpected fusions that play on comfort-food themes,” says Chavarie. “The vitality of the food comes from the fact that our two cooks are artists who aren’t afraid to experiment, have half-baked ideas and playfully extract something innovative that can be made in the creative constraints of a truck.”

Chavarie promises “big flavour informed by our travel and fascination with Asian and traditional Mexican flavors and cooking methods.” There is a clear flavour profile that weaves its way through the menu—kimchi, gojuchang, green onion, and bean sprouts feature heavily—but there is still a thoughtful individuality to each dish.

We stake out a spot on short stone wall across the lot. It’s not long before our food appears through the truck window. By this time a small crowd has formed and the little lot is humming with business.

The seafood pancake is incredible. The huge pancake is dense, but slightly pillowy. Bean sprouts and onion gives each bite a little bit of a crunch, while tender shrimp give it a silky bite. There is a slight kimchi tang in the savoury pancake, and pert brightness from green onion. The hot dog is also fantastic: it’s a juicy beef hot dog is covered with bacon, kimchi, spicy Korean mayo, and a confetti of more green onion.

The noodles are good, a play on chow fun with firm, flavourful tofu, bean sprouts, onion, and a sauce that is mildly spicy, slightly sweet and earthy. It’s nicely balanced and very delicious.

The quesadilla makes a pretty plate, but sweaty mushrooms give it a squishy, wet texture. Neither of us like it. Our friend happens by and eyes our plates, honing in on the quesadilla. We tell him we don’t like it. He mishears us, we suppose, and hilariously says “sold!”, orders one and loves it.

The truck’s basic schedule is a Thursday-through-Sunday series of lunch and supper runs at the Historic Farmers’ Market and Squiggle Park. “It’s the unexpected encounters with flavour and community that bring people to the truck,” says Chavarie. And that’s what will bring me back.