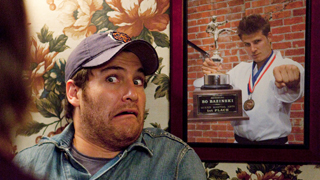 We have not been shy in expressing our joy at the renewal of ABC’s “Happy Endings.” But there’s even better news. This season still has three new episodes.

But as fans or casual viewers of the series may notice, both May 18 episodes (“Bo Fight” and “Barefoot Pedaler”) are a little out of place — which makes sense, because they were intended to air immediately after the pilot.

Zap2it spoke with creator David Caspe after last week’s renewal, and in addition to discussing the series’ growing popularity and Season 2, we asked him about the change.

“We shot a couple of early episodes that had a little bit to do with the aftermath of the break-up,” he says of characters Dave (Zach Knighton) and Alex (Elisha Cuthbert), who kicked off the pilot with an unsuccessful wedding. “People will get a look into what happened to the friends the weeks following the breakup.”

These two aren’t the first to air out of order, either. Hence, Dave’s magically reappearing and disappearing food truck.

“It was agreed amongst everyone that, in trying to launch a show, we should keep it as non-serialized as possible,” Caspe explains. “People who find the show won’t necessarily find it at the pilot. They’ll find it three weeks later or four weeks later, and you want them to be able to tune in, know everything that’s going on and not worry about what happened before.”

“Happy Endings” star Adam Pally, who plays Max, also weighed in on the decision when we recently spoke with him.

“A TV show takes a whole to grow,” says Pally. “If you look at some of the best shows on TV right now — like “The Office” and “Parks and Recreation” — and even “Seinfeld,” the first season is a lot of finding your rhythm and where you work.”

Looking ahead to Season 2, Pally says the experimentation should only help the show find its voice — and its audience. “I think that airing the episodes out of order is a part of that,” he says. “As we come back next season, it will even help, because we’ll have learned what works and what doesn’t… Every element seems really successful. It’s about how you get that working as one machine moving forward.”

Regardless of its order, both the star and the showrunner are confident in the entire 12-episode run.

“We’re really proud of them,” Caspe adds. “We think they’re great episodes. We just wanted to get viewers early on.”

Back-to-back episodes of “Happy Endings” air at 10:00 p.m. ET on ABC on Wednesday, May 18. And check back next week for our full interview with Pally before the May 25 season finale.