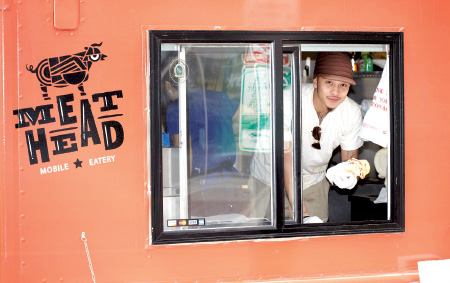 Your once-secret lunchtime haunts have become common knowledge: Who hasn’t heard about the $15 lobster rolls at Red Hook Lobster Pound or the fake mustache-wearing Fojol Bros.? But the wheeled-meal takeover has only just begun. This spring, a new wave of mobile eateries are rolling out, offering everything from kebabs and burgers to cupcakes and Chinese steamed buns. These epicurean entrepreneurs might be the new kids on the block, but they’re already familiar with the lunchtime hot spots*, and they know how to leverage social media to lure customers. Restaurants, watch your backs; food trucks are creating tasty new pit stops all over the District.

MEATHEAD MOBILE EATERY
Street Date: February
Behind the Wheel: This protein-happy, sandwich-pushing enterprise is geared toward carnivores. It’s one of Sauca owner Farhad Assari’s newest efforts and an undertaking close to his heart. “These are sandwiches I love making for myself,” he explains. “So I wanted to share the love.”
Try This: The Moo Moo sandwich ($8), which loads up a buttery, griddled sub roll with a rib-eye steak. It’s topped with three-cheese sauce (cheddar, provolone and mozzarella), caramelized onions, pickles, lettuce, tomato and mustard seed ketchup.
Find and Follow: Meatheadme.com, Twitter.com/wheresthemeat
Hot Spot: Metro Center

SAUCA GRILL
Street Date: February
Behind the Wheel: Farhad Assari, who also owns Sauca trucks Saucalito, Marco Polo and Pangea, introduces another vehicle to his lineup.
Try This: There’s only one item on this menu — Grandma Assari’s Kabob ($8) — though it comes in three forms. This family favorite uses minced lamb and beef, and is served over basmati rice, on a salad or in flatbread. The sandwich-styled version with a pickled tomato, parsley, lime and olive oil dressing is a standout.
Find and Follow: Eatsauca.com, Twitter.com/wheresauca
Hot Spot: Farragut Square

DISTRICT OF PI
Street Date: February
Behind the Wheel: Founder Chris Sommers put his first food truck on the road in St. Louis three years ago and won a legion of fans, including presidential-hopeful Barack Obama.
Try This: Any of the truck’s signature Chicago-style pizzas ($12 for a 9-inch pie, which feeds two). The Beltway is a cornmeal crust pizza topped with Kalamata olives, zucchini, feta cheese and basil. “Most people think of deep-dish pizza as a gooey, chewy mess,” Sommers says. “Ours is much lighter, due to the thinner crust and the fresher ingredients.”
Find and Follow: Pi-dc.com, Twitter.com/pitruckdc
Hot Spot: Franklin Square

AUSTIN GRILL
Street Date: This week
Behind the Wheel: The red-and-yellow truck mimics the brick-and-mortar Tex-Mex chain’s colors. “This option reaches people who can’t reach us normally,” explains marketing specialist Christyn Zehnder.
Try This: You can go for Tex or Mex cuisine here. A good north-of-the-border option is the Original Austin Burger, which comes topped with jack cheese, grilled onions and peppers ($8); or head south and have a grilled skirt steak burrito ($9). Save room for the fudge-y brownie ($2).
Find and Follow: Austingrill.com/416.html, Twitter.com/agtruckdc
Hot Spot: Farragut Square

THE ROLLING FICELLE
Street Date: Late March/Early April
Behind the Wheel: Raised in Valladolid, Spain, by an American mother and Spanish father, owner Juan Jose Quintana grew up loving the sandwiches his mom made with ficelle, a long, narrow baguette (above).
Try This: The prosciutto ficelle — which literally means “string” in French — comes simply dressed with garlic aioli, lettuce and tomato, so each ingredient shines. “There’s less dough in this style of sandwich,” Quintana explains. If you’re feeling ambitious, try the full 21-inch ficelle; otherwise, order the regular, which is half that length (prices not announced yet).
Find and Follow: Twitter.com/theficelle
Hot Spot: Outside the World Bank

CUPCAKE BUGGY
Street Date: June
Behind the Wheel: “I love business, and I love cupcakes,” says owner Sierra Georgia, who went on a sweet, six-month taste-testing road trip between New York and Los Angeles to gather inspiration for her original recipes.
Try This: Every day, the van (sadly, not a real buggy) will offer five flavors from a cast of 25 options. The truck’s signature cupcake is the PBJ: white vanilla cake containing a pocket of strawberry preserves and topped with peanut butter frosting. The nonalcoholic “Mi Mi Mojito,” right, is infused with hints of mint and lime (prices not announced yet).
Find and Follow: Cupcakebuggy.com, Twitter.com/cupcakebuggy
Hot Spot: Near George Washington University

PEOPLE’S BAO
Street Date: Late May
Behind the Wheel: Owner Peter He honed his cooking chops at Red Parrot Asian Bistro in Hanover, Md., and William’s American Bistro in Greenbelt, Md., before deciding to try his hand at running his own business.
Try This: The bao (Chinese steamed bun) filled with duck confit and a white wine vinegar and blackberry jam reduction. Wash it down with a fresh ginger honey iced tea (prices not announced yet). “We’re trying to elevate a traditional Asian street food to a new level,” He explains.
Find and Follow: Peoplesbao.com, Twitter.com/peoplesbao
Hot Spot: Farragut North. Get an advance taste at U Street Music Hall’s kitchen on Fridays and Saturdays in April.

STIX
Street Date: Early April
Behind the Wheel: Self-proclaimed sassy chicks Jane Lyons and Leah Perez came up with their meal-on-a-stick food truck concept as a way for them both to try out a new career.
Try This: If you want a savory lunch, order the cubed flank steak marinated in tequila, lime and cilantro. For a sweeter alternative, try the seasonal fruit stick, right, which might include apple, pear and pineapple. “We hit it with some brown sugar,” Lyons says. “That way it gets this nice creme brulee crust on it” (prices not announced yet).
Find and Follow: Twitter.com/eatstix
Hot Spot: Union Station

SIXTH AND RYE
Street Date: Late April
Behind the Wheel: Restaurateur and Bravo star Spike Mendelsohn, left, is behind this rolling nod to Jewish cuisine, created in collaboration with the Sixth & I Historic Synagogue. Don’t expect to see the reality star behind the wheel; the day-to-day operations for this venture (conceived via a contest for new ideas at Sixth & I) will mostly be handled by chef Malcolm Mitchell.
Try This: The Top Chef is, however, crowd-sourcing ideas for Sixth and Rye’s menu, which will be “as Jewish deli-like as possible,” says sister and spokeswoman Micheline Mendelsohn. Send suggestions to Sixthandrye@gmail.com through the end of March.
Find and Follow: Twitter.com/sixthandrye
Hot (and only) Spot: Sixth & I Synagogue on Fridays

*HOT SPOTS
These are the locations where you’re most likely to find each food truck on any given weekday during peak lunch hours, roughly between 12 and 2 p.m. But always check Twitter before venturing out for a bite, since plans (and parking availability!) often change.

BE ON THE LOOKOUT
If you’re not deep into food truck culture but would like to be — or at the very least, you’d like to know when to expect to run into a line of hungry people outside your office — bookmark this website: Foodtruckfiesta.com. It’s one of a few that do the food-truck following for you. Food Truck Fiesta also offers intel on other new additions, such as the gourmet hot dog truck, Top Dog; the BBQ Bus; and Rolling Wit Burgers.